Like any good college graduate, I’m intimately – and painfully – familiar with Jägermeister, that destructive German digestif that left so many of us hating the world the next morning, and with its bottle that strangely features a stag with a cross between its antlers.  Imagine my surprise when I was walking through Rome on my first day there, gazing up at the architecture of the centuries-old buildings between Piazza Navona and the Pantheon, when the Jägermeister logo jumped out at me from the top of a church.  A moderate white building stood in front of me with two pillars out front supporting the entranceway and windows on each side and above.  It could’ve been a residence if not for the Romanesque bell tower on one side and, at the top, a stag with a cross between its antlers, just like on the liquor bottle. Could it be… Chiesa di Jägermeister?? 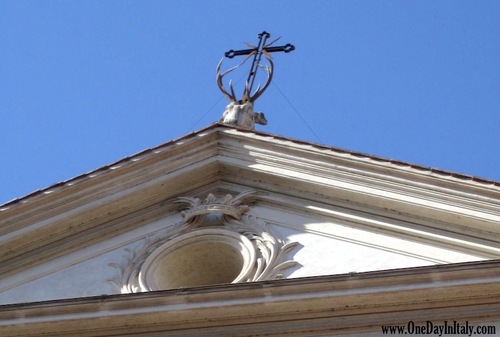 I took out my pocket guidebook and there was nothing under “J” so I tried to find my location on the map and discovered I was standing in front of Sant’Eustachio.  Saint Eustace (“Eustachio” in Italian) was a second century Roman general and the stag and cross were actually HIS symbol.   I walked guiltily past the gypsies sitting on the steps to go inside as I read more about this saint whose family crest had somehow become synonymous with my worst nights in college. 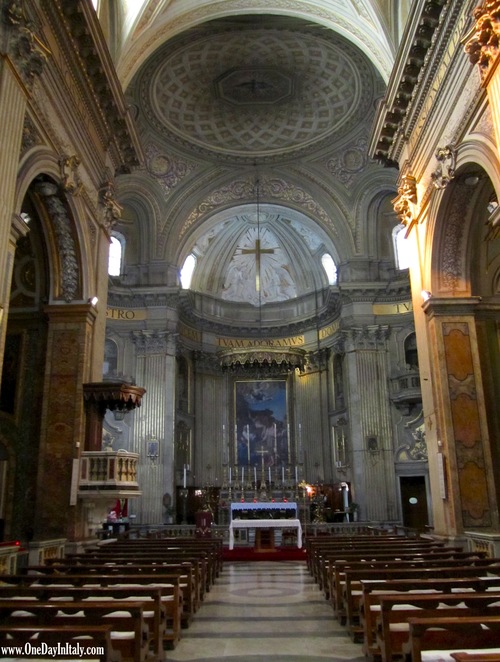 During the reign of the Emperor Trajan (98-117AD) a Roman general named Placidus was hunting in the forests near Tivoli, pursuing a stag.  Suddenly Placidus had a vision of a Christian cross between the stag’s antlers, leading him to reflect upon the teachings of this new, emerging faith.  He soon converted and had his entire family baptized.  It was then that he changed his name to Eustace and adopted the stag and cross as his family crest.

According to a much disputed legend, after Eustace had his family baptized God decided to test his faith.  And I mean REALLY test it.  First, all of his servants died of a plague.  Then, when they were on a sea voyage, the captain of the ship kidnapped Eustace’s wife.  While crossing a river with his two sons Agapius and Theopistus, a lion and a wolf somehow snatched them.  (I think Eustace should’ve just stayed out of boats)

Eustace returned to Rome, where the Emperor Hadrian was now in power, and resumed his duties.  During a celebration of Roman victories, however, when he was told to offer incense to the pagan God, Eustace refused and Hadrian sentenced him and his entire family to death.  Hadrian had them put inside a bronze statue of a bull or ox, as had been done in ancient Greece, and roasted alive.  The year was 118AD.

OK, but why would Jägermeister adopt his family crest?

Because of St. Eustace’s hunting prowess and timing of the vision that spurred his conversion to Christianity he is the patron saint of hunters (as well as firefighters and anyone facing adversity).  In 1935AD Germany, foresters and gamekeepers in Germany were called jägermeisters, so when they decided to create a drink by the same name what better image to affiliate themselves with but the patron saint of hunters?

The Feast Day of Sant’Eustachio is September 20th, so go out and get a bottle of Jägermeister to celebrate and remember the Roman general who sacrificed so much for his faith (and then pray to St. Eustace to get rid of your hangover the next day).