The best coffee in Rome?  It’s not really something I had given much thought to before.  The best gelato? Of course! The best pizza? Sure! But the best coffee?  Espresso was always just functional… some was more bitter or burnt-tasting than others, but I had never really thought much about where to get the “best” espresso. 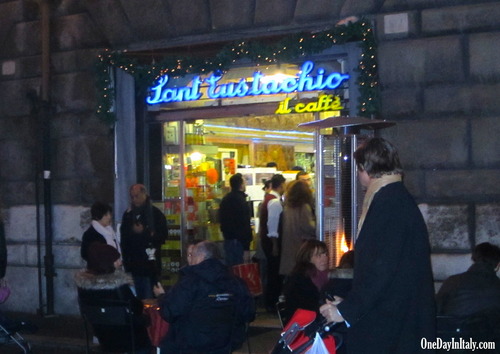 Until a friend told me that the “best” espresso in Rome was at Sant’Eustachio, a little (and I mean TINY!) caffé right in front of Basilica di Sant’Eustachio.  I wrote about St. Eustace after seeing the church my first time in Rome (read the post HERE). 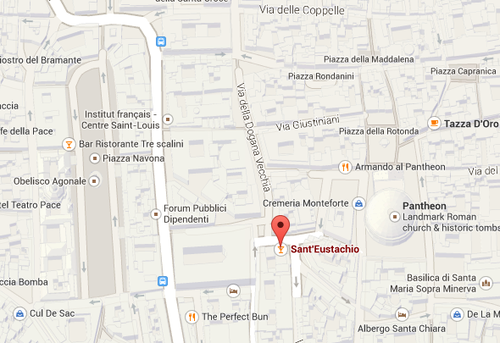 I have to say, I found the caffé a little intimidating and walked by it twice before finally going in my last night in Rome.  It was always swarmed with Italians!  They were four deep at the bar, shuffling and shouldering in, the baristas shouting orders in Italian, and a line at least a dozen people long reaching out to the sidewalk of people waiting to place their order with the cashier (they would then take their receipt to the baristas at the bar).  People were milling about inside and out drinking coffee, laughing, talking in that boisterous way always and forever to be associated with Italians.

It was a bit much.

But I finally took a deep breath, grew a pair and got in line.

I wasn’t sure exactly what to order – there’s a sign with several different drinks behind the cashier – so I just ordered a café, which they call their “Gran Caffé”.  I timidly turned around and inched my way through the crowd to the bar on the other side of the store, not wanting to be too pushy.  I caught the eye of one of the baristas and gave him my receipt, at which point he asked me, “Zucchero o no?”.  To which I replied “Si!” Yes! Because when is sugar a bad thing?

Still a little doubtful that all of this effort would be worth it, I sipped my espresso and – oh my god!  It was fantastic!  Not bitter, not burnt, almost fruity, kind of nutty, rich and deep and OH-SO-GOOD!

I wound up buying some grounds and liquor to use with my moka back home, and bought some to my friend who made the recommendation, too.  I only wished I hadn’t waited till my last day in Rome to go!

Early the next day I ran back for a second cup before leaving Rome and to make sure the first time hadn’t been a fluke.

Sant’Eustachio Il Caffé was opened in the 1938.  All of the furniture and mosaic tiling you’ll see in the caffé are still original.

In 1999 brothers Raimondo and Roberto Ricci began to run the caffé.  They continued the tradition that started in 1948 of roasting the coffee over wood.  They have their own special blend of Arabica beans that is now all fair trade coffee bought from non-profit organizations.  Throughout the year, after each batch of beans is purchased and roasted, the proper combination is ascertained by Sant’Eustachio’s specialists to create the traditional and characteristic “Blend”.

I only have one more word for you, to keep in mind the next time you’re in Rome: GO.