Before I had left LA, one of my Roman friends had told me about a keyhole on Colle Aventino (Aventine Hill), from which you could see the dome of St. Peter’s Basilica.  A few months later I was watching the Oscar-winning film La Grande Bellezza and was delighted when the main character looked through it in the movie! And so one sunny day in Rome when I happened to be alone with no specific plans, I decided to go see it for myself.

There’s a little food shop in Travestere that I had heard of and wanted to stop into, so I figured I’d cross Ponte Sisto (my hotel was nearby), check out “Tastevere Kmzero” and then walk West to cross Ponte Palatino.  From there it was only a short walk to Aventine Hill.  The woman at the front desk at my hotel had told me – when I gave her a vague description of what I was looking for – that I should go to Giardini degli Aranci, Garden of the Oranges, and that anyone could tell me how to get there. Good plan, right?

Tastevere Kmzero was closed for the holidays.  And then I got horribly, ridiculously lost. 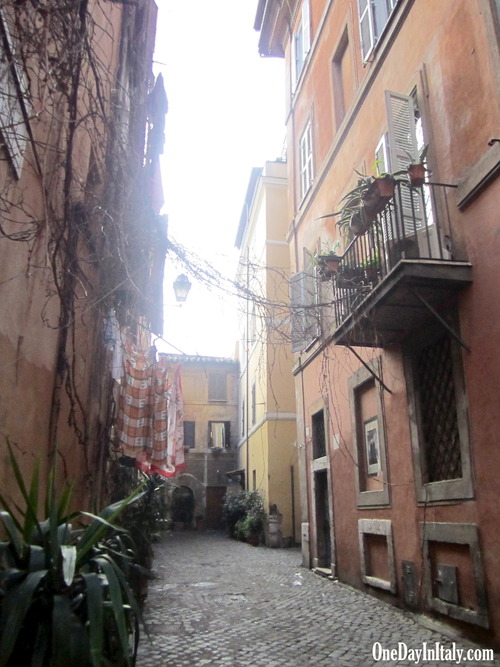 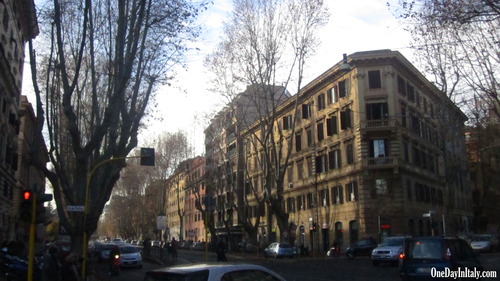 I walked and walked and walked and eventually realized I was nowhere near my destination.  When I asked people on the street how to get to “Aventino” or “Giardini degli Aranci”, they looked at me like I was crazy.  Somehow I wound up at the main Trastevere train station (the one that links to the airport) and finally someone was able to tell me to take the #3 bus and tell them I wanted to get off for Giardini degli Aranci.  I bought my bus ticket and was (finally) on my way.

While on the bus I realized that, unlike during my previous trips to Italy, I had bought an Italian SIM card for my phone this time.  I had a data plan!  I had Google Maps!  I’M A COMPLETE IDIOT!

When the driver told me this was my stop I looked up Giardini degli Aranci on Maps and vuola!  I started walking toward the pin. 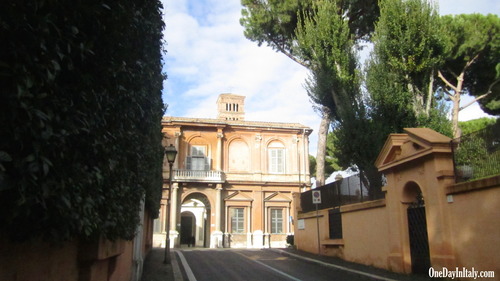 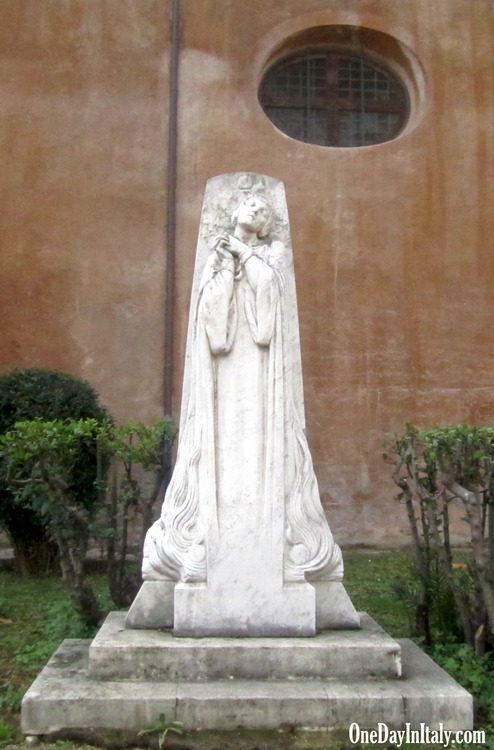 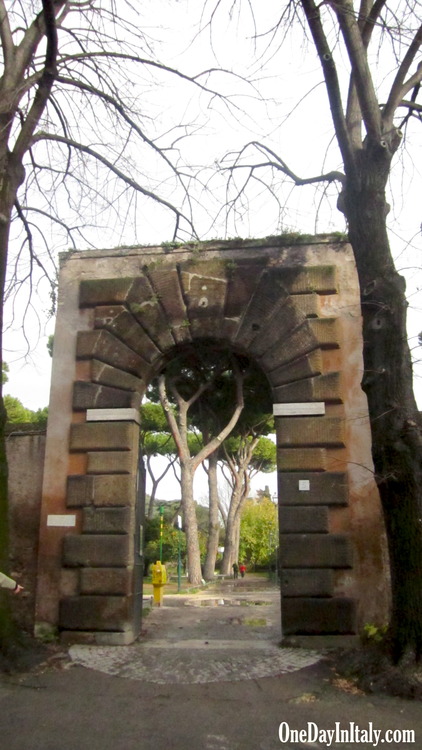 Giardini degli Aranci (also known as Parco Savello) sits right next to the Basilica of Santa Sabina, its entrance marked by a stone archway. Legend says that Saint Dominic, a Spanaird, gave the garden its name and its first orange tree. Having transported the sapling from his homeland, he planted it close to the cloister of a church where it flourished. The tree remains to this day, visible through a “porthole” in the wall of the nave. Miraculously, a younger sapling grew on its remains which continues to bear fruit. There’s also a legend that says that Saint Catherine of Siena picked the oranges from this ancient tree and made candied fruit to give to Pope Urban VI.  Years later, orange trees were added to the monastery garden, which became known as the Garden of Oranges.

I followed a segway tour through the arch and, even though it was chilly outside, was met by a large group of fruit-filled orange trees.  I walked through them, looking for the gate that might contain the keyhole, but instead only found a large concrete overlook. 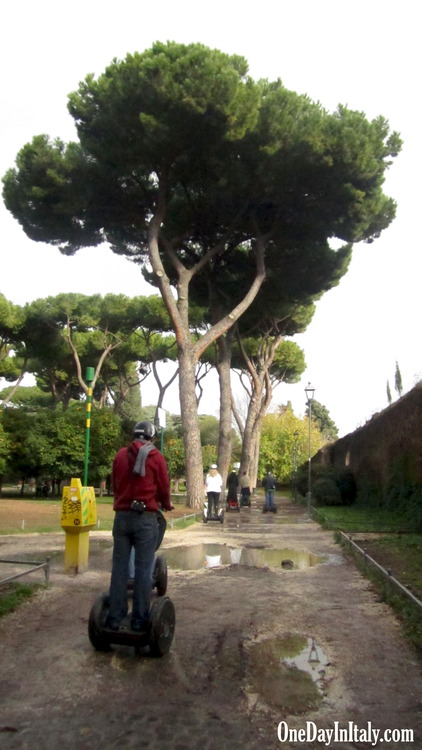 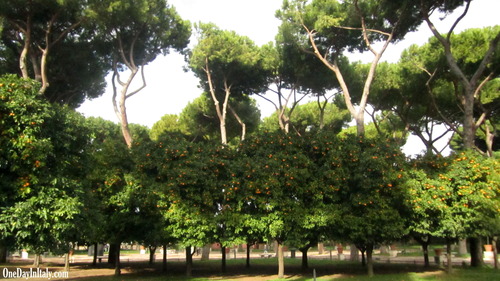 Though the view of Rome was immense and impressive, it wasn’t what I had been looking for.  Whipping out my phone, I googled “keyhole view of Rome” and found it: it was very nearby and known as “The Keyhole of the Knights of Malta”.

The Knights of Malta are a sovereign power with no territory. They are what is left of the former monastic order of the “Knights Hospitaller” which was created during the Crusades to protect pilgrims in the Holy Land. They used to control Malta (a country composed of seven islands in the Mediterranean Sea) until they were expelled by Napoleon in 1798.  Even now that there is now, again, an independent Republic of Malta, the order bases itself in Rome, where they have been since 1834. They have their own passports and coinage, diplomatic relations with over 100 countries and permanent “observer” status at the UN.  Their goal, as an order, is to provide humanitarian and medical aid, similar to the Red Cross.

I exited Giardini degli Aranci and followed the new pin in my Maps app to the right till I arrived in a small piazza, “dei Cavallieri di Malta” (“of the Knights of Malta”), which is home to the Villa del Priorato di Malta, the home residence of the Order.  I didn’t even notice the gate that was directly to my right until I moved to the middle of the piazza and turned around. 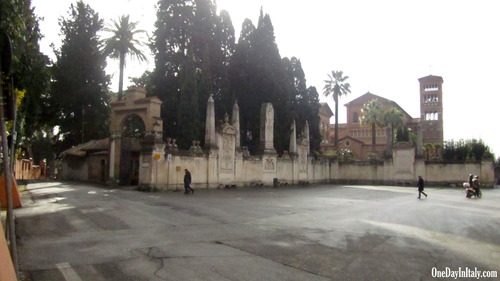 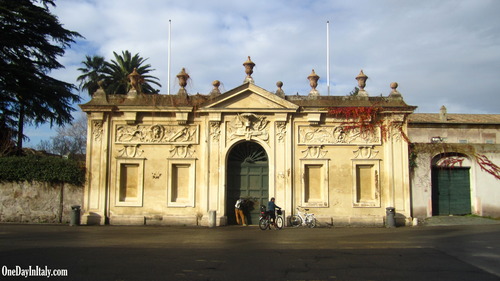 The central portal of the villa is a large wall of white stone, faux “windows” carved into it with a large, arched green door in the center.  I was lucky: there were only a few people in the piazza that day.  There was no line in front of the door to look through the toward the Basilica.  There was ONE person there, though, and it was a good thing – no signs marked the infamous keyhole. In fact, there was no indication that anything significant was in the square at all.  If someone hadn’t rested their bike against the door as they bent over to squint, I might’ve found myself testing out every quarter-sized hole in the square!

Then the cyclist had peddled off I approached the door, leaned over, closed one eye and – bam! There it was!  The dome of St. Peter’s Basilica!  Hedges on the other side of the portal arched over and around it, perfectly framing it where it stood, all the way on the other side of Rome!  Absolutely amazing!

Unfortunately, my picture didn’t come out quite so amazingly… 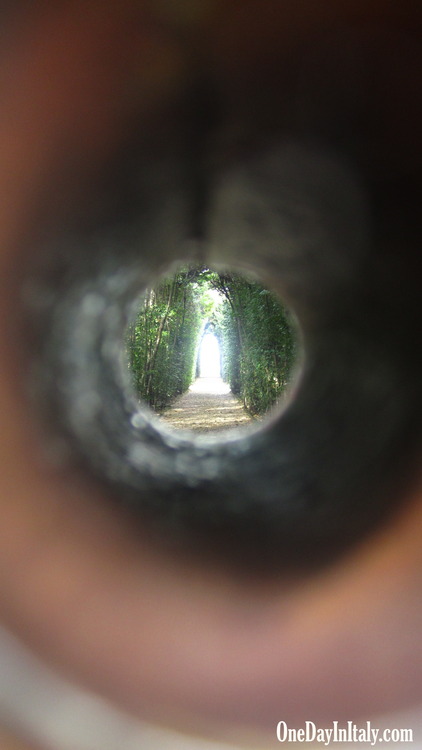 Others have had much more luck, though (and better equipment, and MUCH more skill). 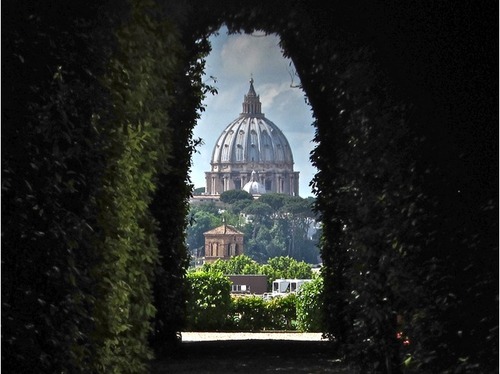 Have you had the chance to try your luck with this photo opp? If so, share it with us!