OK, first, can I just say how excited I am to see these in Milan next Spring? I first heard about “Il Bosco Verticale”, “The Vertical Forest”, last week when one of my Facebook friends posted about it.  It’s the brainchild of architect and designer Stefano Boeri who somehow managed to find the support to actually BUILD these two experimental towers in Milan’s Porta Nuova district. 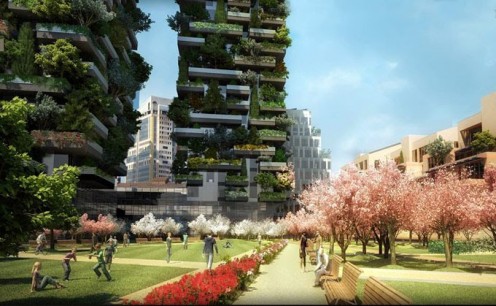 The two apartment buildings, measuring 260 and 367 feet tall, have been a five-year passion project as they meticulously scrutinize every aspect of the the design.  Boeri’s team carefully selected the 480 big- and medium-sized trees, 250 small trees, 11,000 groundcover plants and 5,000 shrubs (the equivalent of a hectare of forest!) to thrive in this specialized environment.  The actual plants that will be used have been grown explicitly for this use so they would become used to their conditions as they grew and adapt to them.  The planters were designed to accommodate the trees’ heft while allowing for flexibility.  To ensure this, the design team tested them out in wind tunnels to make sure they would make it through strong winds. 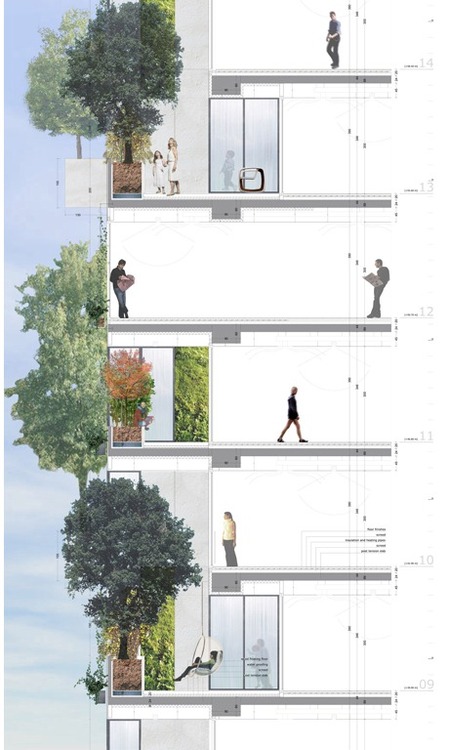 The buildings aren’t just meant to look cool, though.  The idea is for the plants to absorb some of Milan’s small-particle pollution, CO2 and dust, produce oxygen, reduce noise pollution, and create a microclimate around the plants, which will be irrigated with the building’s greywater (water already used by tenants for washing that doesn’t contain human waste).  The roofs will be covered in wind turbines and solar panels will be placed strategically to utilize as much geothermic energy as possible within the building. 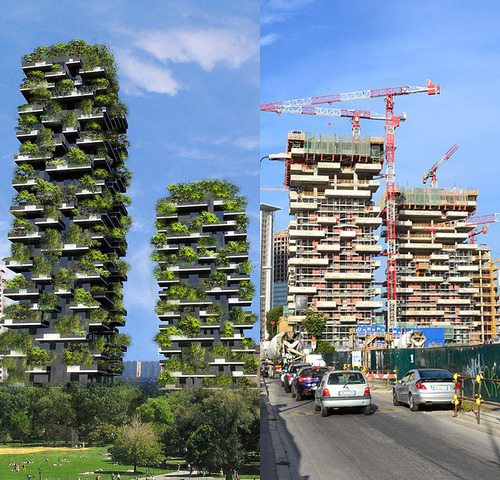 Sure, the project has been met with some criticism.  Boston-based scientist and journalist Tim De Chant wrote on his blog, “In reality, trees on skyscrapers will likely be anything but sustainable. A skyscraper that’s built to support trees will require more concrete, more steel, more of anything structural.” OK, so what? Once it’s built, it has the potential to enhance the lives of those living in the area for an unforeseeable amount of time, perhaps decades.  And according to Boeri, all of these additions add only 5% to construction costs, a valuable investment in the community. 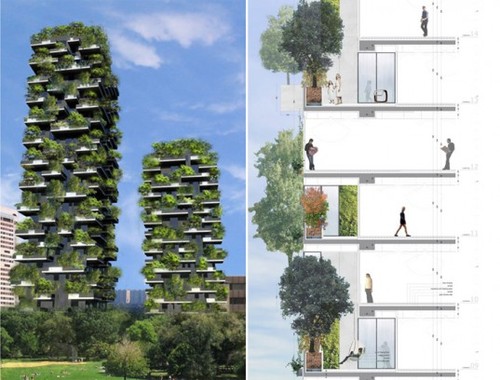 The apartment buildings are only the first step of a 6-part project that Stephan Boeri has called “BioMilano”.  Those six projects include:

2) “Wood House: social housing and the tree cycle The Wood House project aims to build low density and low cost social housing by using prefabricated forms of architecture and wooden panels recycled after conservation work on the trees which run along the Ticino river.” (http://www.boeristudio.it/)

3) “Courtyard Farms. A constellation of epicentres within systems of neighbourhood agriculture The project for the restoration of 60 publicly owned and abandoned courtyard farms around Milan has its origins in the plan to create a new relationship between the city and new forms of agriculture. This kind of agriculture is more varied than in the past (fruit and vegetables, cereal crops, productive woods, bio-mass) and produces for the city as well as allowing for different kinds of research, training and work.” (http://www.boeristudio.it/)

4) “Expo 2015: a global kitchen garden The project for EXPO 2015 is based around a model for new forms of local agriculture which surround Milan. A vast global kitchen garden will be created, as well as a large space for agro-food production which will produce food for a cosmopolitan metropolis.” (http://www.boeristudio.it/)

5) “Metrobosco: a forest around Milan The Metrobosco project will develop a ring of trees around Milan which can encourage animals to settle there from those non-domestic species which are common in the hinterland areas close to the city.” (http://www.boeristudio.it/)

6) “Biological and plant decontamination of polluted urban areas The cleaning up of ex-industrial areas and obsolete structures in the city through biological and plant cultivation creates new possibilities for public open space. Through the cultivation of polluted land, they can be cleaned-up and biomass is also created, and in this way the city can regain lost spaces which were seemingly lost forever.” (http://www.boeristudio.it/) Sounds incredible, if he can find the support to accomplish it.  That support will probably be based upon the success of Bosco Verticale, which is nearing completion (as of September 2014).  I’ll be in Milan next Spring and can’t wait to see the towers for myself.

I took the metro up to the Gioia stop today and walked the few short blocks to Bosco Verticale.  Next on the to-do list: go inside!