You may know this about me already, but I have a thing for towers.  Bell towers, clock towers, castle towers – you name it.  So when I was planning my trip to Venice and discovered there’s a tour inside the Torre d’Orologio, I *had* to go!

I booked it online and read the note on my voucher to exchange it for a ticket one hour before the tour start time.  Easy, right?

But first I had to find it.

Also easy, right?  I mean, its that big bell tower in the middle of Piazza San Marco!  But where’s the ticket office??

I knocked on this door. 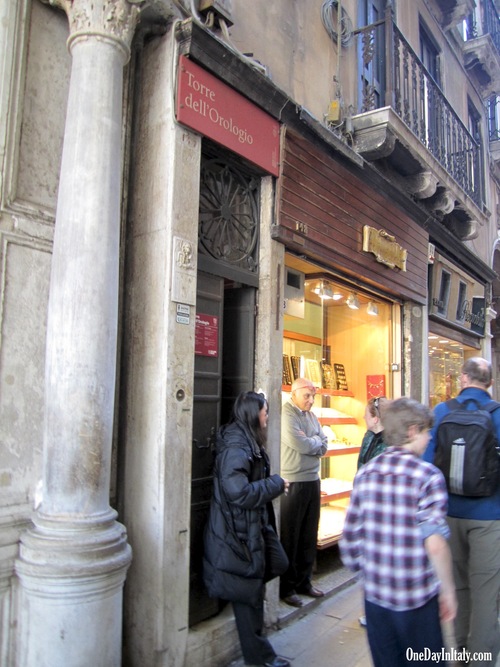 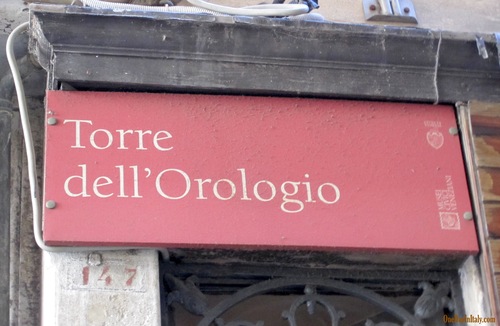 No answer.  In my broken Italian I asked the nearby street vendors, who answered me in broken English to maybe try the Ducal Palace ticket office?

The Ducal Palace ticket office didn’t know.  I walked around, and around, and around trying to figure out where to exchange my voucher.  There was no location written on it – I read it seventeen times.  Finally, after going through everywhere I had looked with the same street vendor (bless him), he shrugged his shoulders in hopelessness and with a final, last-ditch suggestion – with seven minutes until my tour started – wound up saving the day: “Try maybe Museo Corner?”

Museo Corner is at the opposite end of Piazza San Marco from Basilica San Marco, in front of which we were standing.  I all but ran there, climbed the vast marble stairs and walked into the lobby, panting, knowing that if this wasn’t the place there was no way I’d be able to find the *right* place in time.

Ten people with green stickers on their chests plus a lady behind a desk turned to look at me as I came in. I walked up to the lady, showed her my ticket, and she gave me a green sticker, too.

Right behind me a petite redhead in a bubble jacket who wouldn’t've been out of place on a Wyoming prairie raced in, also panting (I didn’t feel so bad, then).  She smiled at us all broadly and introduced herself as Jenny, our tour guide, and, with a secret in her eyes that reminded me slightly of Gene Wilder in “Charlie & the Chocolate Factory”, invited us to follow her back across the square.

On our way toward the Torre d’Orologio, Jenny explained how she only technically has 7 minutes between each tour, but that she usually winds up talking too long and going over, which means she has to sprint back to Museo Corner to pick up her next group.

Torre d’Orologio is the second most prestigious clock tower in the world, according to Jenny, and was the facade for the world’s first “digital” clock.  You can see it there, on the middle level that used to be the location of the bi-daily procession of figurines.  Two sets of large Roman numerals tell the hour and minutes (in 5 minute increments).  More on the world’s first digital clock later; as for the rest of the facade… At the top of the tower is the Winged Lion of Venice and at the bottom is a clock face that tells not only the minute and hour, but also the day, month, phase of the moon and current zodiac.  To those who know how to read it, that is.

And the windows on either side? Those are privately owned apartments that are rented out during the year! Can you imagine?! 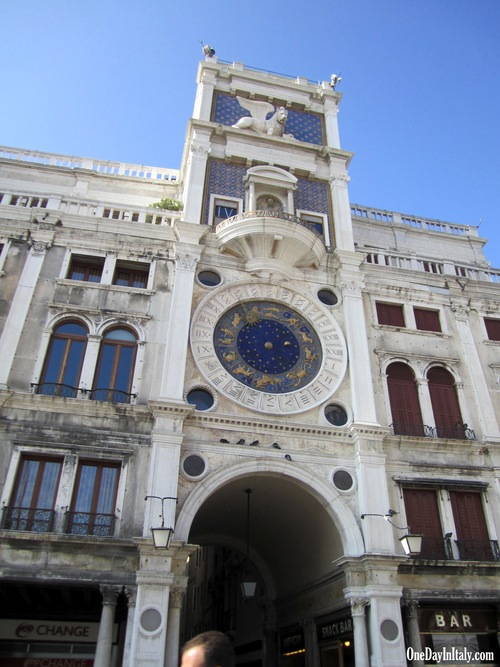 We climbed up a narrow staircase through the door I had found earlier to the first level, behind the clock face. 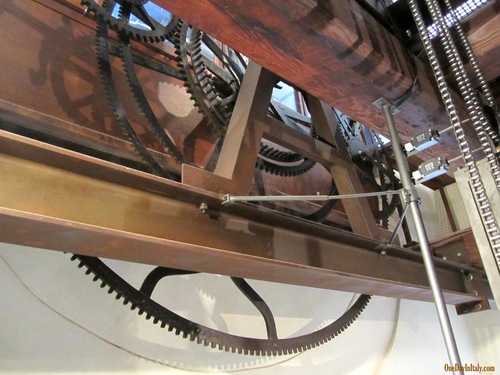 The clock was completed in 1499.  In order to keep the time, someone (the “timekeeper”) had to pull the weights at various intervals to reset the clock.  In 1499, the designer of the clock became the timekeeper, and his descendants followed in his footsteps, until 1999 when the clock was reworked to be automatic. 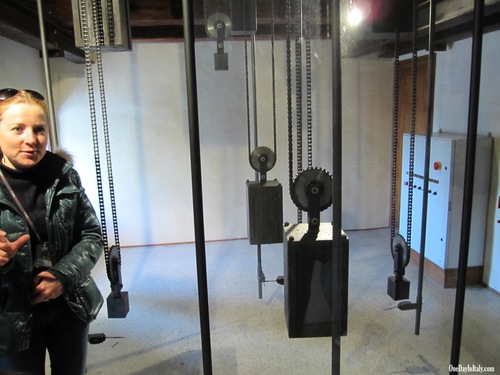 For those 500 years, though, the timekeeper and his family LIVED in the clock.  This was their living room – weights hanging right in the middle! 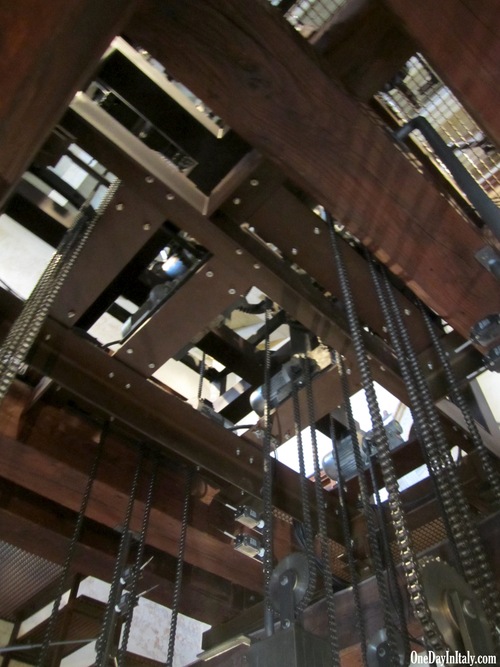 They had a great view through the portholes, though… 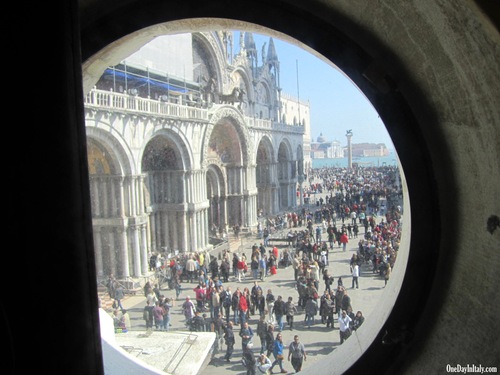 The view from their bathroom on the next level up wasn’t quite as spectacular, though it kept my interest for the few minutes we were standing there.  What an incredible machine! 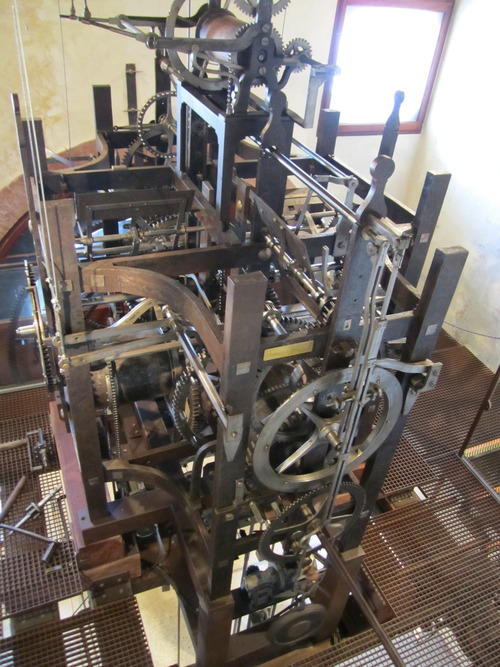 From their bedroom in the middle level of the clock tower, where the “digital clock” now sits, four figurines used to parade in a wide circle twice a day.  The track is still there, even though they now only do the procession twice a year (The Feast of the Epiphany on January 6th and 40 days after Easter). 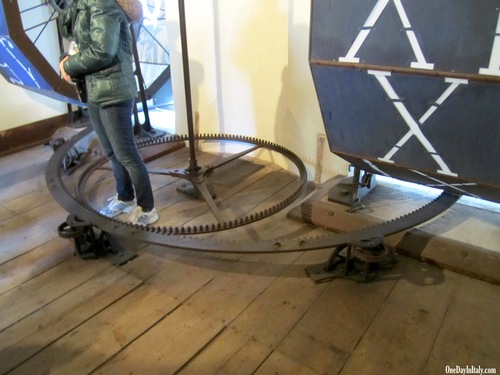 During the procession, four figures move on the track outside of the clock tower, past the statue of the Virgin Mary that is attached to the facade, and back inside in a smooth – albiet slow – circle.  The angel leads them, blowing a trumpet, and the three wise men follow her, bowing the the Madonna as they pass. 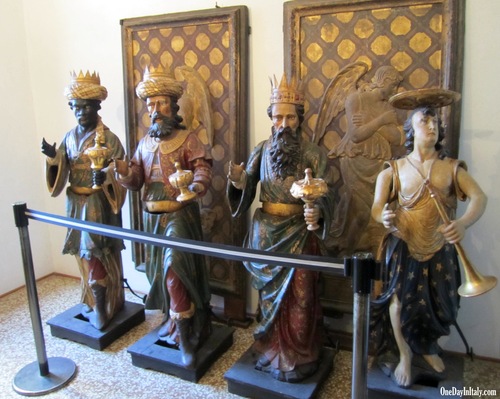 Crowds – even thicker than usually – stuff themselves into St. Mark’s Square to watch, but because we’re smart let’s just watch the video:

Now back to that so-called “digital” clock… 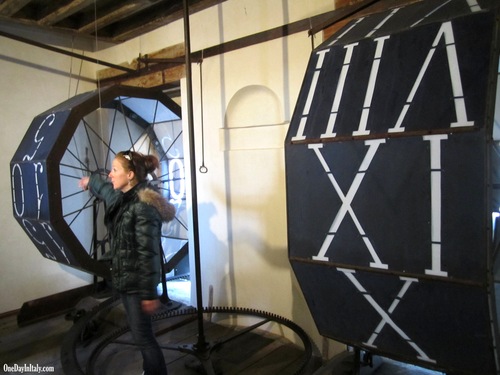 In 1855 these numbers were added, Roman numerals telling the hour (1-12, not 1-24 as Italians tell the time) and modern numbers counting by fives telling the minute (or, the last five-minute mark). 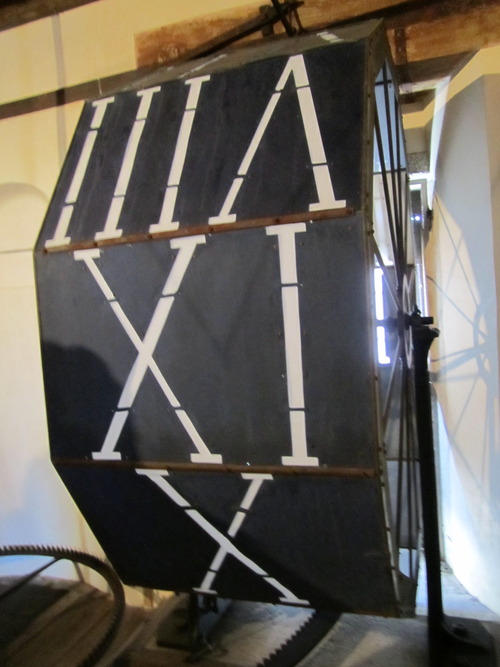 When these were first installed there were gas lights inside so they could be read at night, but there were problems with the mechanism so adjustments were made in 1866. 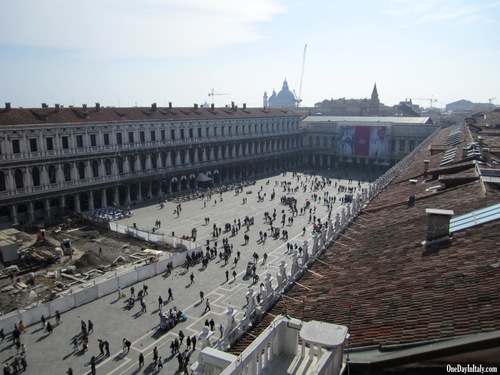 From the top of the clock tower you see an amazing view of St. Mark’s Square (by the way, under the billboard at the end of the square is the entrance to the Museo Corner ticket office, where you meet for the tour). 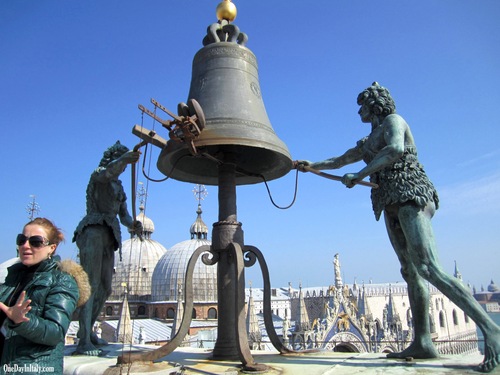 The real stars of the clock tower are the Moors, the bell ringers of Torre d’Orologio. 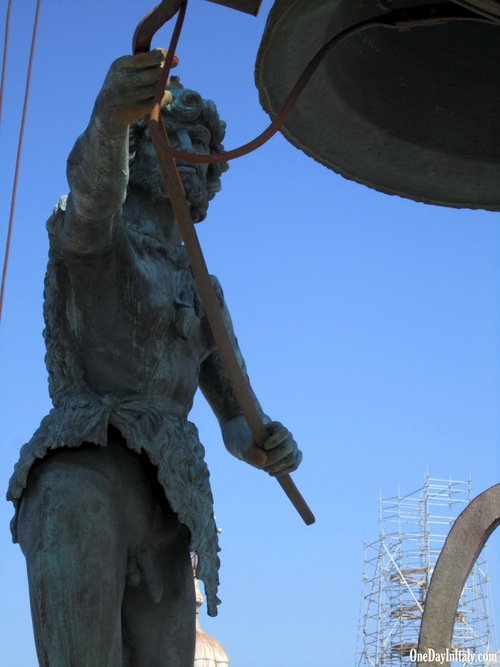 You may notice that the Moors aren’t wearing any pants, something Jenny pointed out several times adding “Now, ladies, don’t get any ideas! Though they are pretty cute…” 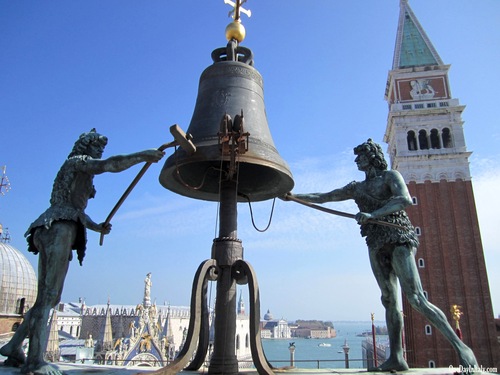 In the middle are two hammers called the “meridian”.  At five minutes before noon and midnight the hammers begin striking six sets of 22 blows.  To be honest I didn’t really catch why, and I couldn’t find the reason online after the fact.  If anyone knows, please chime in! It’s been bothering me.

After she explained the 132 chimes of the meridian in the middle of the day and night, those apartments right next to the clock seemed a little less desirable…

Before we climbed back down the narrow staircase to exit the tour, Jenny told us the Moors were getting tired and asked if any of us would like to volunteer to take their place.  I asked if we would be allowed to wear pants. 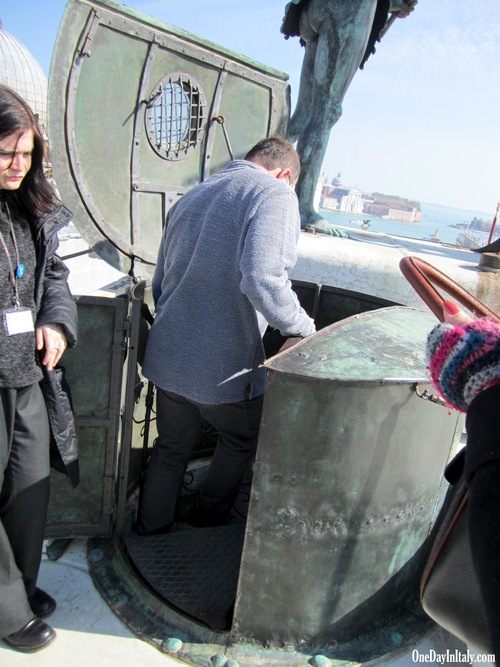 I dragged back toward the end of the group to snap a few more pictures of the amazing view. 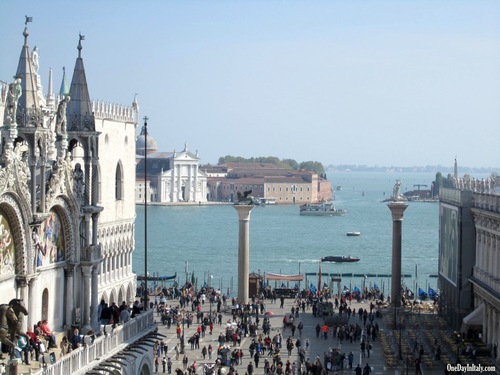 St. Mark’s Square is filled with so many interesting and historical sites – the square itself and Basilica di San Marco, of course, Torre d’Orlologio and the Campanile (bell tower), the Doge’s Palace… 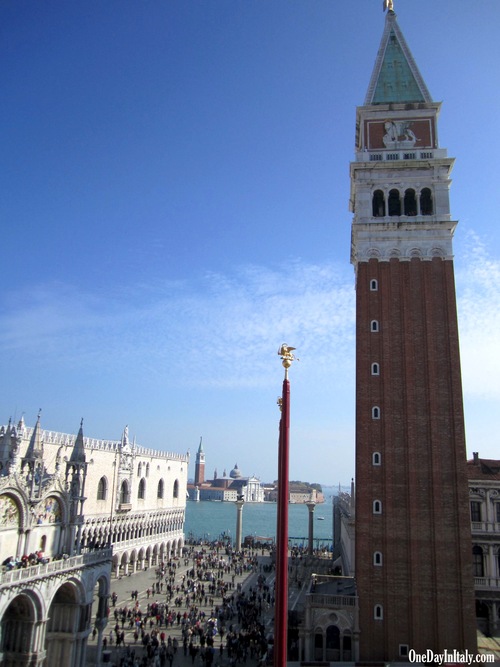 And at almost all times of day the square is milling with people. 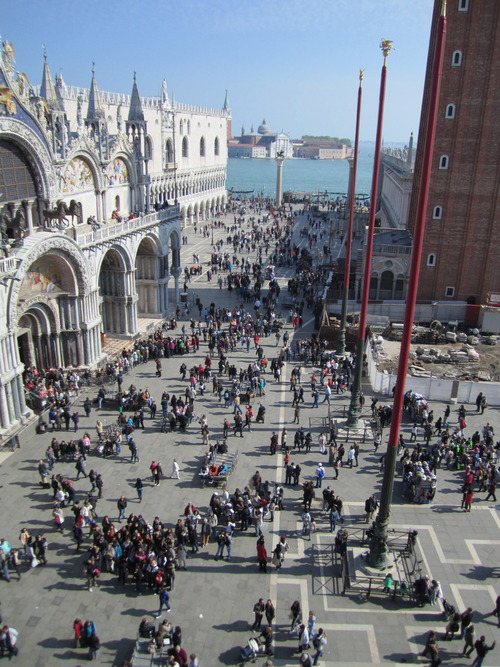 It was finally my turn to climb back down through the portal, and as I did I spotted this sign: 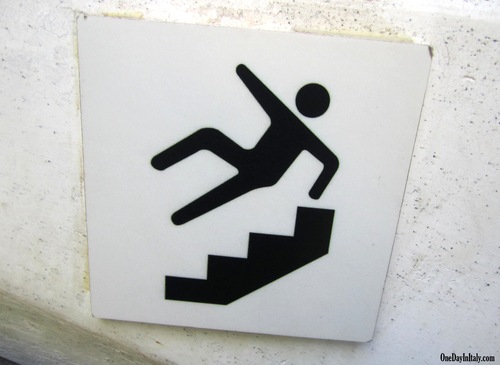 I wasn’t sure if it was instructional or giving warning (haha).

I *LOVED* the tour of Torre d’Orologio and would highly recommend it if you’re looking for an interesting hour with a small group hearing fun anecdotes about one of Venice’s lesser-visited-yet-still-primary attractions.  You can book tickets by clicking on this link for VivaTicket.  You DO have to prebook, as space is limited.