Leading up to Christmas I thought I’d share some Italian holiday stories.  Last year I talked about La Befana, the Christmas witch who leaves presents for good children on the eve of the Epiphany (the night before January 6th).  Today I’ll tell the story of the lucky little bell of San Michele (St. Michael)!  It’s not really a Christmas story, but it’s become one in my house after my parents and I spent some time around Christmas on the Amalfi Coast last year. 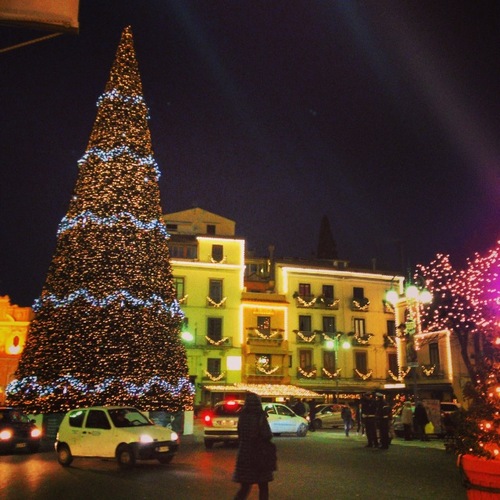 Sorrento is a beautiful at Christmastime!  Lights are strung from every window in Piazza Tasso, where a huge Christmas tree dominates the square.  Down every side street and alley, ribbons and spheres of light hang above your head as you bustle through the shops, sit with a post- (or pre-!) dinner hot chocolate (like only Italians can do it!) or just stroll around to soak up the holiday cheer.

A few days before Christmas I was killing time before dinner, popping into stores on Via San Cesareo, when I stumbled upon a store selling nothing but Christmas ornaments.  Against one wall was a huge display of wooden bells in all different colors and sizes.  While I was looking at them, the clerk, a stylishly dressed young woman, approached me and asked me if I knew the story of St. Michael’s bell.  I did not, and so she handed me a piece of paper that explained it.

“Once upon a time a little shepherd lived in Anacapri and he was the poorest among the poor children of the place. His only wealth was a small, ramshackle house that he shared with his mother, a widow, and a tiny sheep that he used to pasture on the slopes of Mount Solaro.

One evening as it was getting dark the child lingered to pick up flowers and when he turned around to call the small sheep he could not see her anymore. He felt a pang of pain in his heart! It was his best friend and companion, all that he had in the world. The boy searched and searched for his sheep, fearing it has stumbled from the rocks into the sea. Then, suddenly, he started to hear a bell start to ring in the distance and impulsively ran toward it. His tiny bare feet flew careless of the pebbles, of the thistles and of the night already fallen… until he got to the edge of a ravine.

A sudden flash of light stopped the boy in his tracks and, wrapped up in a golden beam, splendid on his white horse, San Michele appeared to him, the boy’s sheep by his side with a small, shining bell around its neck. ‘My boy, said the Saint, gesturing to the bell, take it and always follow the sound of it. It will keep you from all danger.’

Since then his life was filled with sweetness and happiness and every one of his wishes was satisfied. On the spot of the apparition a villa was built which was called San Michele.”

Some versions have St. Michael giving the boy the bell, rather than hanging it on the sheep’s neck.  Some mention that the bell is carved with a four-leaf clover.  In WWII, replicas of these little bells were very popular with visiting soldiers who would take them with them as good luck charms. 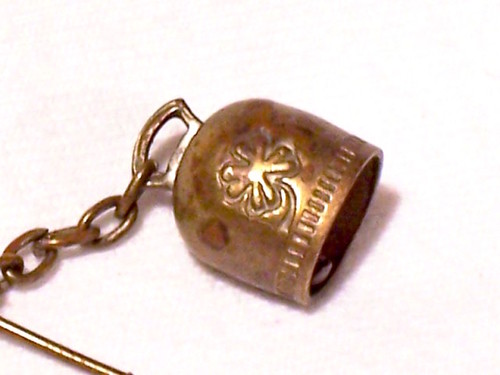 I thanked the clerk and bought several for friends & family back home.  What a great story, and great memento!