I was in Cortona for six days between Christmas and New Year’s last year, and almost everything was closed.  I went hiking a few days and poked into the Etruscan museum one morning, strolled down Via Nazionale (the main shopping street) and read in a couple cafés, but the rental car company wasn’t answering my inquiries, the cooking classes I had looked into were “off” for the holidays and the fortress at the top of the hill and monastery at the bottom were both closed to visitors.  Cortona is lovely, but OH MY GOSH WAS I BORED.

So, on December 30th I decided to take the train a few minutes north to Arezzo.  Arezzo is suggested as a base in this area, rather than Cortona, because its a little bigger and therefore offers more services year-round (and it’s the capitol of the province where it lies, also called “Arezzo”).  I picked up a map from the informational point right outside of the main train station and then walked the long street that leads right into the center of the medieval section.

Most of Arezzo’s streets, after you leave the main drag from the train station, are steep. Consider this fair warning.

The first thing I did was go into the Basilica di San Francesco, which is home to a series of frescoes completed in the middle of the 15th century by Piero della Francesca called “The History of the True Cross”. Even in this time when most things were empty, I had to reserve a time to see the frescoes later in the afternoon. Who knew?

While I waited I decided to walk around a bit (this day wasn’t really planned out at all; I barely knew anything about Arezzo except that it had been an important Etruscan and then Roman city). I turned a corner and was suddenly here:

Do you recognize it? What about from this view?

This square, Piazza Grande, was the scene of many of the scenes in the beginning of Roberto Benigni’s Oscar award-winning movie “La Vita É Bella“, “Life Is Beautiful”! If you haven’t seen it, you totally should – it’s a beautiful and brilliant movie. 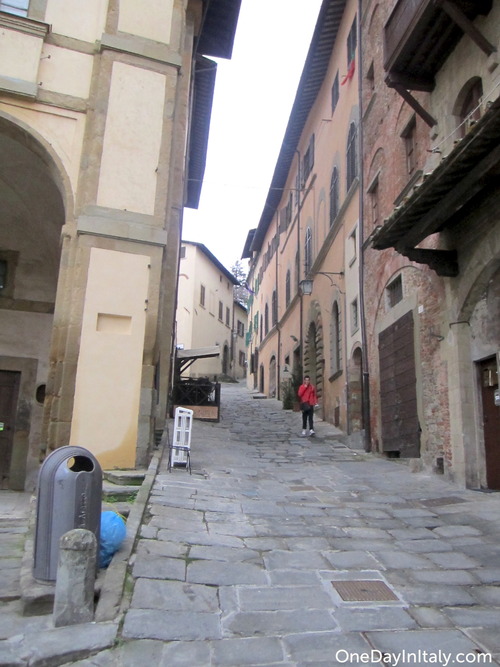 Roberto Benigni follows his love interest right up this alley, out of the piazza, on several occasions. 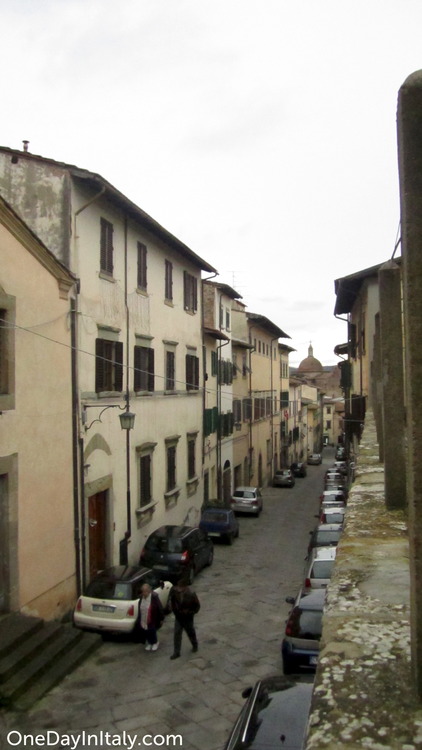 It turns out Arezzo was the home of a lot of great artists – from Giorgio Vasari to Petrarch to, in a nearby village, Michelangelo himself.  I saw “Casa Vasari” on the map I had picked up at the information point and decided to head there first.

Giorgio Vasari was a renowned painter, architect, philospher and writer in 16th century Tuscony.  He is famous for his frescoes in the Uffizi Gallery, the construction of the corridor connecting Pitti Palace to the Uffizi, authorship of “Lives of the Most Excellent Painters, Sculptures and Architects” (which set the standard for art-historical writing) and many, many other revered works of art, built this house in Arezzo in 1541AD.  He was responsible for the layout and for all of the frescoes on the walls and ceiling (unfortunately, no photos were allowed inside, but click here for the museum’s official site).

Vasari wrote of his home: “principiata in Arezzo, con un sito per fare orti bellissimi nel borgo San Vito, nella migliore aria della città” (“in the middle of Arezzo, with a site to create beautiful gardens in San Vito quarter, in the best area of the city”).

I thought it was really interesting to see what he would paint when he wasn’t been commissioned to paint a particular thing.  The house was filled with allegorical scenes from Roman myth.  He finished the frescoes in 1568AD.

Pictures were allowed in the garden, though no flowers were blooming in December.  It was a quiet and peaceful place, though – and space to build a garden in the city probably didn’t come cheaply. 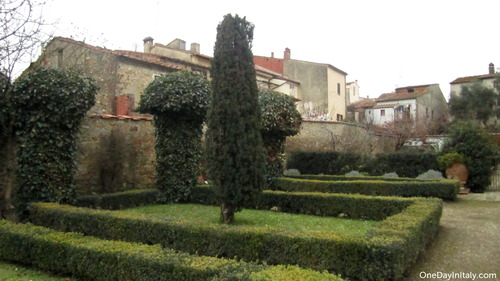 After that, I really just walked around.  Arezzo was awarded a bishop’s eat in 1098AD and the Cathedral of Saint Donatus (below) was begun in the early 1200′s.  It’s facade, however, was unfinished until the early 20th century.  Piero della Francesca, the same guy who did the series of frescoes I would see later that day, completed a frescoe here, too. 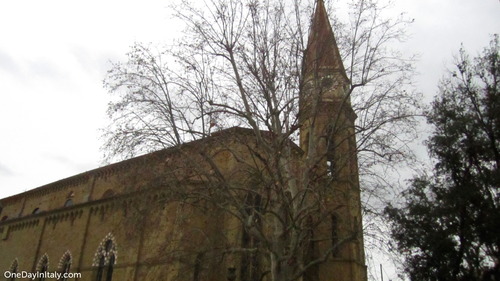 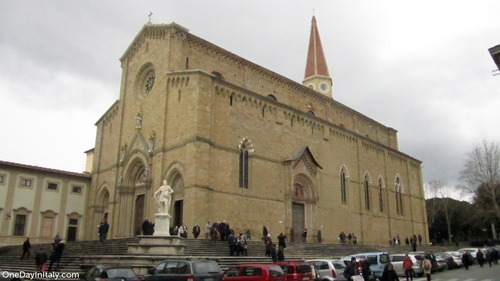 Palazzo del Comune, also known as Palazzo dei Priori, is just a little ways down from the cathedral.  It was built in 1333 as the residence of the municipal authority and is still, to this day, the seat of the city government. 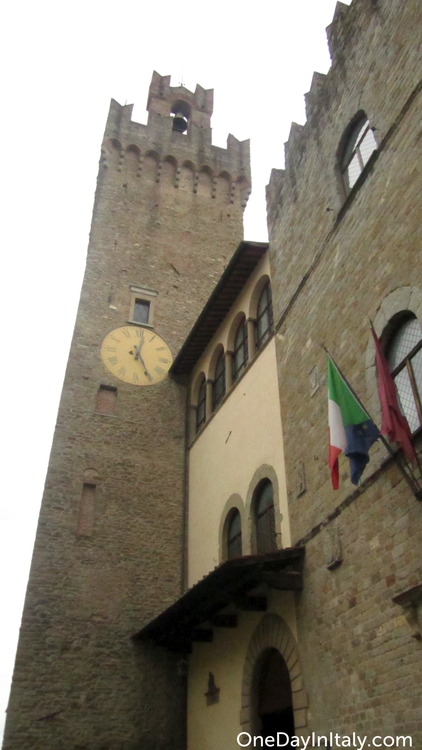 Across the street is the 13th century Church of San Domenico and, in the piazza in front of it, is a covered-over opening to the medieval city well. 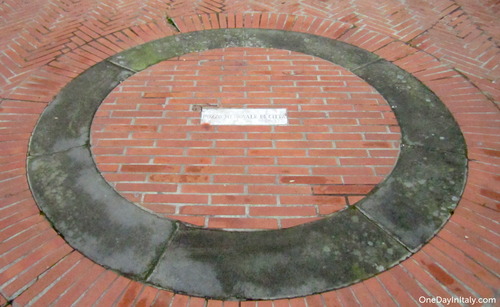 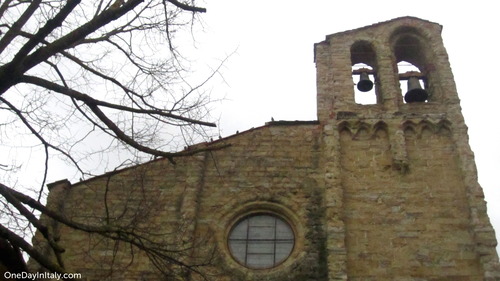 I went back for my 2pm appointment to see the frescoes in the Church of San Francesco (no photos allowed here, either – sorry!).  They give you a little brochure that tells you what’s supposed to be happening in each one.

After about 10 minutes I had seen all the frescoes and was then bored, so decided to stroll back toward the public park that’s across from the cathedral.  The park is known as the “Passeggio del Prato” (Passage of the Field). 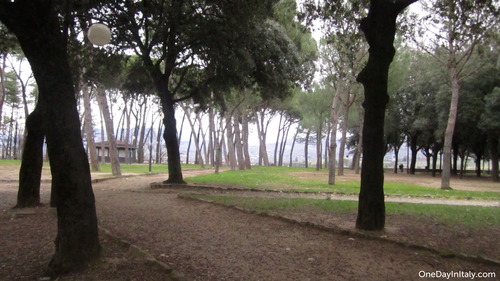 The back of the park offered wonderful views of the Tuscan countryside. 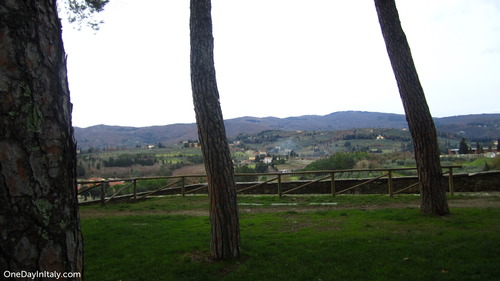 In the middle of the park is a gigantic white marble monument; a tribute to Petrarch created in 1928AD. 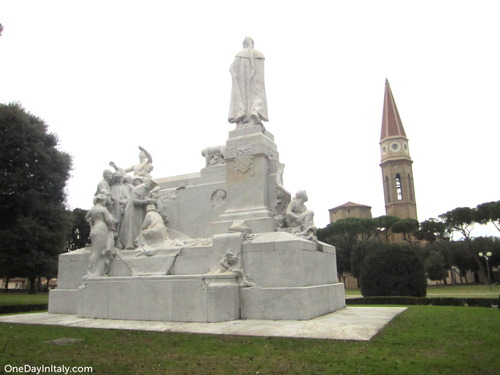 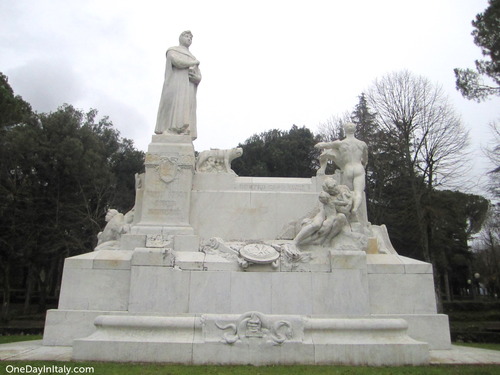 I admittedly didn’t do much in Arezzo.  There are several other city museums, the ruins of a Roman amphitheater and a Medici fortress – but I was just walking around, idling about and seeing whatever was right in front of me to see.

I walked back to the Arezzo train station. I read this sign on the platform and had to do a double-take: “Do not cross the railway lines / Use the subway”. There’s a subway??? Why would you have to take the subway just to get to the next track? Why not just walk underneath through the hallway?!

Then I read it in Italian: “Vietato attraversare i binari / Servirsi del sottopassaggio”.  Literally translated: “It is forbidden to cross over the tracks / Make use of the underground passageway”.  Whoever translated that into “subway” needs to brush up on their vocab a bit…