I travel alone and though I consider myself to be smart when it comes to safety while traveling, I also try to be open to meeting people and having new experiences.  I don’t like being rude to people if I can help it. Sometimes, I’m not so lucky.

“One day in Italy” I was walking through the Borghese Gardens in Rome.  A beautiful public park, this particular April the grass and trees were virile shades of green, flowers were blooming in shades of purple and pink and the sky was a fairytale mixture of skyblue and puffy white.  Picnickers were out in full force with their checkered blankets by the fountains and small lakes, a soccer game was taking place in a field and two dozen bicycles must’ve zoomed by on the tree-lined streets as I walked from one side of the park (where the Borghese Gallery is) toward Piazza di Popolo. 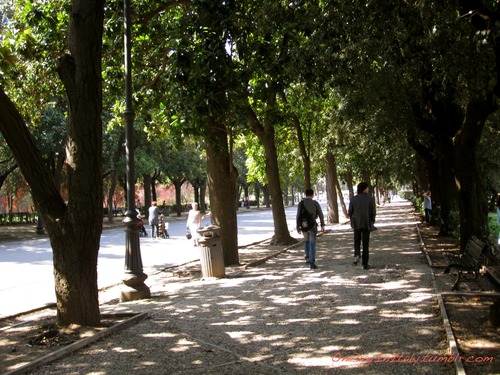 In the middle of my blissful stroll (which was doing wonders restoring my mood after a harsh day in the Vatican museums), a very docile looking man walked up to me.  In his hand he had a bundle of roses and clutched a fistful of thread-woven friendship bracelets.  He tried to hand me a rose, which I politely refused as I continued to walk.  He followed, saying “A beautiful rose for a beautiful lady.  Please? Free!” with a strong Indian accent.  He seemed innocuous enough, so I (graciously, I think) took the rose and thanked him, not stopping till he grabbed the hand I was holding the rose in and began tying a friendship bracelet to it.  I protested and he said “An Indian Blessing!” with a big smile, mumbled something (which I assume was the blessing), and before I could form another thought I had six inches of woven thread tied tightly around my wrist.

Hoping this encounter was over (though not unpleasant it was a bit disconcerting, even then), I thanked him with a confused smile and resumed my walk.  He kept pace with me and held out his hand. “A few euro?”, he said.  I think my jaw dropped open.

“No, you said free”, I think was my clever retort. Hey, I was a bit shocked, gimme a break.

“One or two euro? Just one?” he said, still pleasantly smiling and keeping pace with me as I walked.

At this point his happy-go-lucky smile abruptly disappeared and his face looked like a thunderhead.  He grabbed the rose from my hand and glared at me like he wanted to bash me over the head with it!  I stopped, literally stunned, and after glaring with hate-filled eyes for another second he turned on his heel and stalked off in the other direction.

I looked around, not believing what just happened, but everyone was just going about their business.  Not an irregular occurrence, then.  I looked down at my wrist where the bracelet was still tied.  I yanked at it but it wouldn’t come off – it was tied too tightly.

I continued my walk, blissful bubble popped but good mood still mostly intact, working at the bracelet, trying to wedge it over my thumb and off my hand.  It took the rest of my walk – a good ten minutes – to succeed, at which point I promptly threw it over the outlook into Piazza di Popolo.

Throughout my travels I’ve seen several other gentlemen carrying similar items begin to approach me.  Now, I hate to say it, but I’m a bit more firm and a lot less courteous as I refuse their offer and continue walking.