Today is my mother’s birthday and, being a good Italian family, we celebrated yesterday at the Sunday Family Dinner.  I made fresh pasta and sugo and gave my mother her birthday gift: two flights for her and my dad to meet me in Italy for Christmas.

My mom has always been interested in her family genealogy but has never been to Europe, much less Italy.  All four of her grandparents immigrated from Italy to Ohio in the early 1900′s.  Some of them we don’t know a lot about but we know that my grandmother’s father, Leonardo Panella, came from a small village on top of a hill between Bari and Naples called “Greci”.  We’re going to rent a car and go there a few days before Christmas

The first mention of Greci is in 535 AD following an expedition of Southern Italy by Emperor Justinian.  It was destroyed by the Saracens in 908 AD and then rebuilt in 1039 AD by Count Potone as a trade stop between Abruzzo and Puglia. But I can remember my mother saying since I was a kid that people from Greci are really Albanian, something I was never sure how I felt about.  I mean, how long do you have to be in a country, how many generations have to pass, before you become “of” that country?  Albanians settled in Greci after Alfonso V of Aragon, King of Naples, requested the help of Albanian general George Skanderbeg in 1448 AD to defeat French-supported insurgents.  Skanderbeg’s help was requested a second time by Alfonso’s son, Ferdinand I in 1458 AD.  To set up a barrier of defense from any straggling troops coming from north or south, an Albanian squadron put roots in Greci, which had a perfect strategic position, and soon the King of Naples officially bequeathed them the land (as well as a few dozen other villages where Albanian troops had settled) in gratitude for their support. 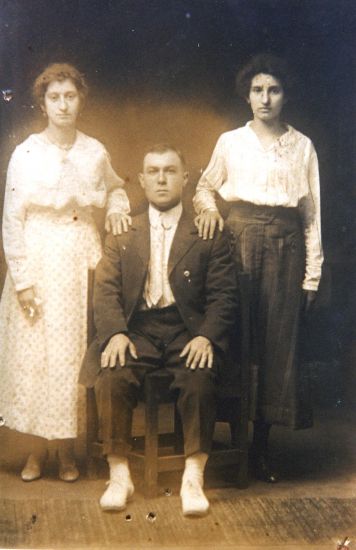 My great-grandfather, Leonardo Panella, immigrated from Greci to Canton, OH in the early 1900′s, where he met his wife, Louise Semonella, who had also recently immigrated from Italy.

Greci had several thousand residents in the 1800′s, but in the early part of the 20th century a lot of the younger generation decided to immigrate to America (many, if not most, to Canton, Ohio).  Young people continued have continued to leave Greci over the decades in search of new work opportunities, and now there are only around 800 people living in this hilltop village.  There are some 17th century buildings remaining, but most of the town has been rebuilt following earthquakes in 1962 and 1980.

There’s a large group of “cousins” from Greci who have built web communities, chronicled visits back to the cittadina and hosted family reunions in Canton, Ohio (where it seems most immigrants from Greci settled).  You see the same surnames over and over: Pucci, Mazzarella, Norcia, Dioguardi, Pascarelli, Scrima.  My mom and her sister are going to the reunion this year, and I’m so excited for her to be able to say she’s going “back” to Greci in December! It means so much to me to be able to facilitate this experience for her – and for me! – even if my newfound Italian skills won’t help that much in a village that has been speaking an Albanian dialect for centuries.