My entire day in Capri was discombobulated.  Out of any other day on any other trip I’ve taken, this day was admittedly the worst thought-out.  An epic fail.  Though, I suppose I did get some good “next time I’ll know” stories out of it.  Nothing went as planned, starting with the lack of ATMs at the port in Sorrento, mistakenly walking the long and arduous (and un-scenic) route from the port to Capri city, not being able to find the Phoenician Steps, Villa San Michele or Faraglioni Beach, Mt. Solaro being enshrouded in clouds and blocking the supposedly fantastic views of the Bay, getting lost on my way down the mountain and – worst of all – missing the boats at the Blue Grotto.

The Blue Grotto (Grotta Azzurra) is a natural sea cave within which the water seems to glow with a supernatural light. You enter by rowboat, steered by a tourist-friendly local who, for around 12-15 euro per person, propels you through a small opening at the front of the cave.  The opening is so small that everyone has to lay down on their backs in the boat to fit through.  Inside the cave Roman statues were found, giving evidence that the Romans knew about the Blue Grotto.  It’s believed that they called it “Gradola” after a nearby landing area, but avoided it because they thought it a place inhabited by witches and monsters.

The radiant blue light isn’t a product of mineral deposits or neon fish.  It’s simply what it looks like: light.  Beneath the small hole you enter through, hidden from the human eye by the water and separated by over a meter of stone, is a much, much larger hole.  It’s true, that far down there’s not a lot of light per square meter, but the hole is so massive that it actually allows in a comparative abundance of light, much more than the small hole you sail through.  This makes the water below you shine brighter than the cave above water, which only receives a bit of light from the upper opening, and makes the water “glow” blue.

Everything I had read had suggested hiring a rowboat to the Blue Grotto at the port right when you get off the boat, then making your way around to Anacapri, then Capri and looping back to the port to go back to Sorrento.  Thinking I was being smart, I said “If everyone is reading this and being told to go in that direction, I’ll do the opposite and miss the crowds!” Hey – it works at Disney World! You go to the back of the park early in the morning and the lines are shorter, because everyone else is so excited to be there that they stand in line for the first thing they see.

Well, Capri is not Disney World.

After my mountain hike and a quick lunch at a pizzeria in Piazza Vittoria I decided it was about time to make my way to the Blue Grotto.  It was 2:30pm.  The bus lines were HUGE but I saw a street sign pointing West that said “Grotta Azzurra”.  I generally prefer to walk, anyway, so I decided to avoid the busses and get there on my own two feet.  If there were directional signs, it couldn’t be that far away. 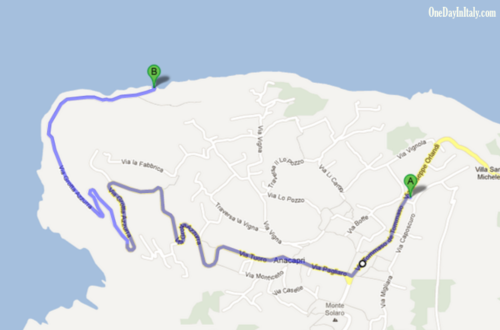 And hour later, after following more signs to “Grotta Azzurra”, I didn’t seem to be any closer and was beginning to think this may’ve been a mistake.  Capri is a very private island, I realized. Apart from the two main tourist areas with shops and restaurants and a strip on a smaller scale in Marina Piccola, there was nothing to see just by walking.  There were walls of stone and greenery on both sides of the street, hiding what I could only assume were hotels or homes.  I started imagining crazy things behind the walls just to entertain myself: colorful menageries, gardens with elaborate mazes of shrubs, little gnomes playing games and laughing like in that movie a few years ago (Gnomeo & Juliet?) 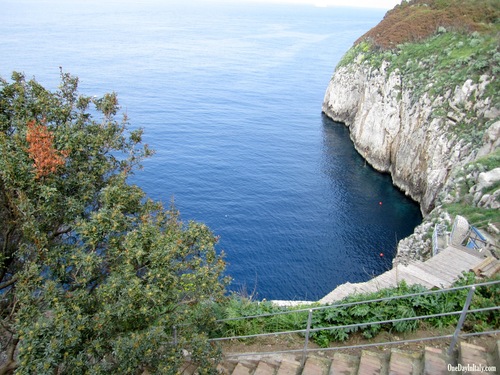 What?! How could this happen? Where were the boats? I knew that when the weather was stormy and the seas were rough the boats couldn’t enter the cave, but it was a clear, calm day!  I had been looking forward to this so much!

A couple walked up the steps from the sea with cameras and stood near the bus stop.  They appeared to be tourists (cameras and fanny packs), so I asked them if they spoke English.  They did.

“Where are the boats?” I’m sure they could hear the pathetic squeal in my voice.

“They stop every day around 3:30 because the tide gets too high, but today they left early,” the man answered. ”It’s the slow tourist season and there was no one else here for them.”  The lack of sympathy in his tone made me want to pout even more.

I stood next to the couple, waiting for the bus, wishing I had taken the advice of the many blogs and tourbooks I had read and come to the Blue Grotto first. Really, I could go back to Capri again some day and do my whole “planned” day over, the right way this time, with all of my “next time I’ll know” knowledge.

For those of you who, like me, have yet to sail within the depths of the Blue Grotto, here’s a really well-edited video I found on YouTube to hold us over for the time being: