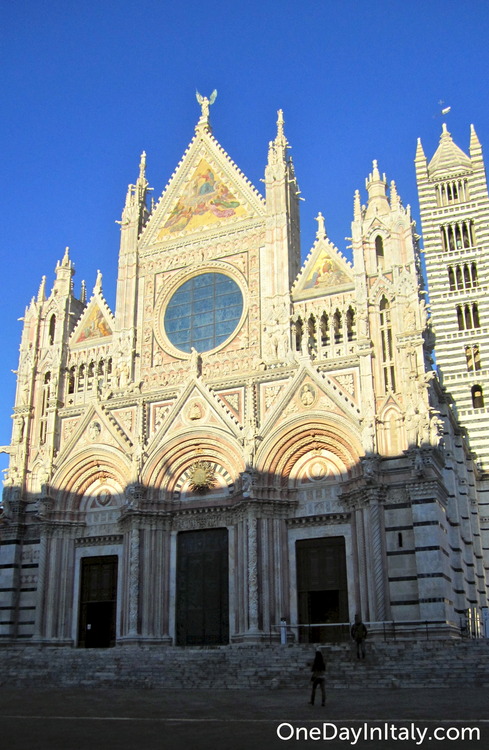 The first thing I did when I got to Siena was pick up my “Opa Si” pass, a ticket that lets you get into the five areas of the Duomo Complex: the cathedral itself, the Piccolomini Library, the Baptistry of San Giovanni, the Crypt and the Museo dell’Opera (a small museum that houses works of art that used to be in the duomo; it also has one of the best views of Siena from its roof).

After picking up the pass, I headed straight for the duomo.  Inside I decided to chance their audio-video guide, picking up a tablet and headphones from a disinterested lady behind a desk in the nave.  I turned it on and a map popped up on the screen.  ”Touch the place on the map where you are,” the woman told me in Italian.  ”It’s best to start outside.” 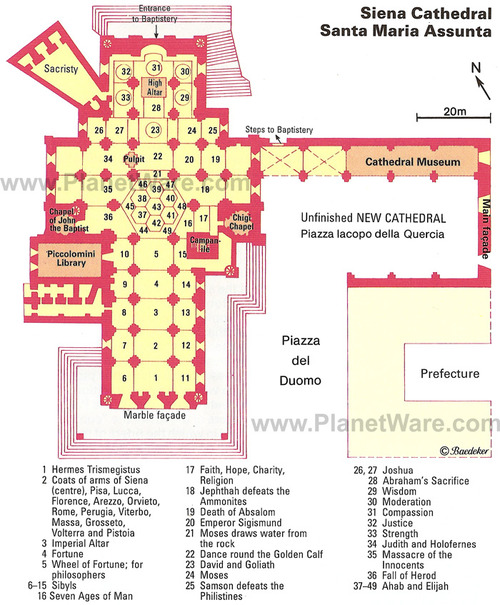 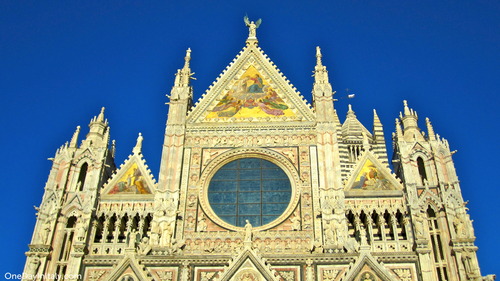 When I got outside I pressed the box associated with that area and it launched a narrated video.  Historical information, factoids and photos explained exactly what you were looking at in a not-boring way (and when it got boring, you could fast-forward through it).  It was amazing!

On the outside of the cathedral there is supposedly (though I couldn’t find it) a Latin phrase of five words that, when written in a square, read the same phrase no matter if you read it vertically, horizontally, from any side. A medieval “Easter egg”.  It’s very old Latin so there are many, many possible translations, but the most poetic to me is “God holds the plough, but you turn the furrows”. 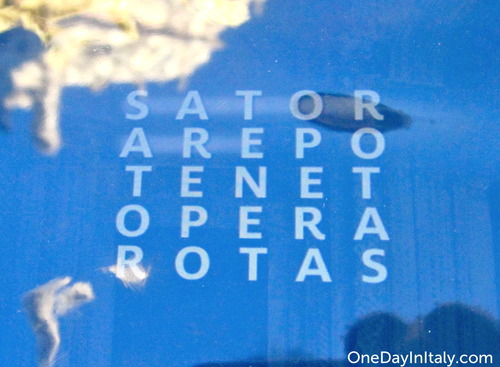 The Duomo is famous for, among other things, it’s intricate marble floor. As you cross over the threshold, this phrase in marble inlay greets you, warning you to enter with respect and decorum. 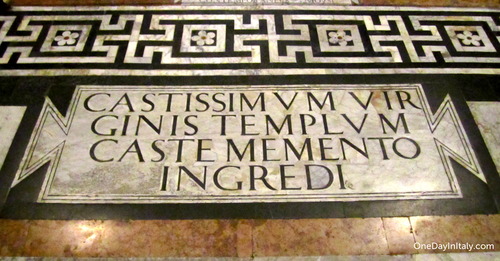 But who couldn’t treat a place this beautiful with respect? 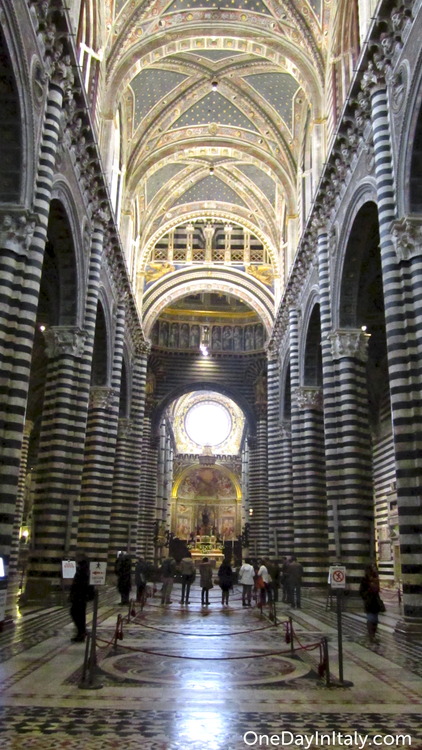 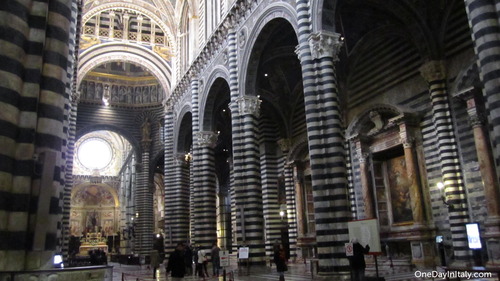 The black and white stripes are also marble, and a nod to Siena’s black & white coat of arms. 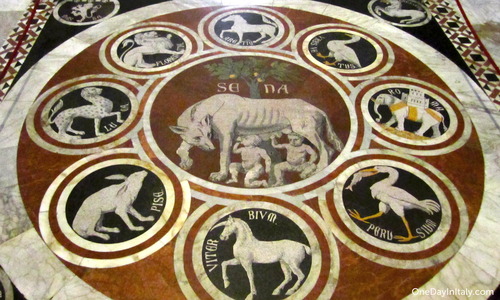 Most of the artwork on the floor is marble inlay. This one, however, is mosaic, which leads them to believe it is the oldest. Each animal represents a nearby city & ally to Siena. 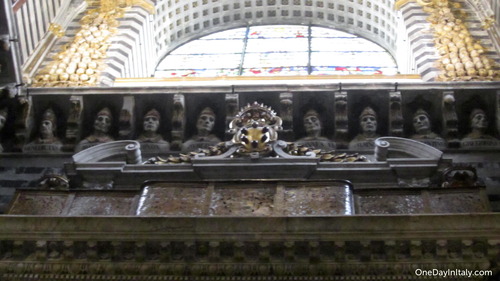 Italy seems to have a thing for spooky heads of famous and / or religious dead people looking down on you from above. 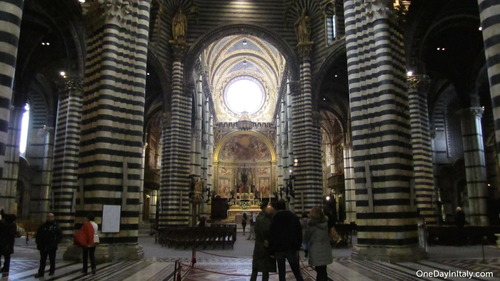 Beautiful chapels line the nave on both sides. 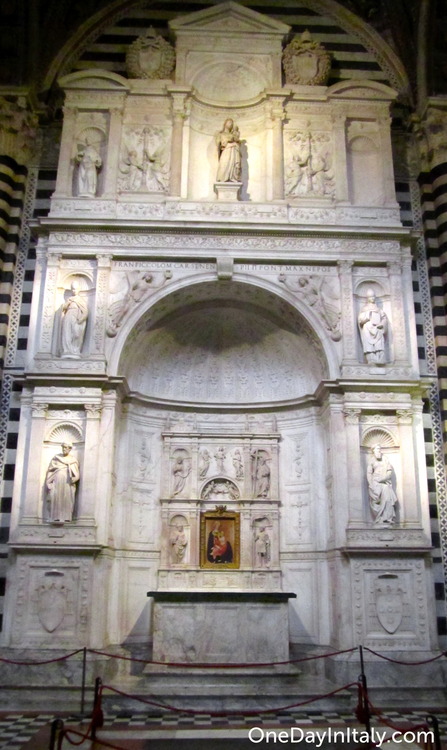 Two of the statues in this one, St Peter and St Paul, were done by Michelangelo. He put himself as St Paul. 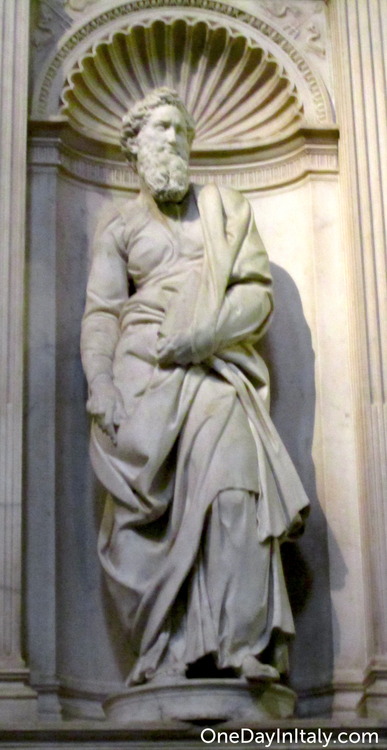 As you reach the altar – look up!  Siena’s Duomo has one of the most spectacular domes I’ve ever seen! 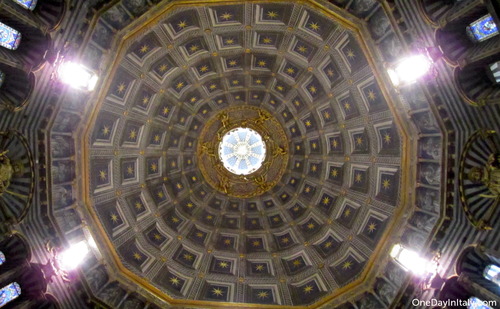 Holding the dome up are a series of black & white striped pillars.  Leaning against the two pillars closest to the front doors are these two wooden posts.  ”Why?”, you ask? Let’s check our handy-dandy audio-visual guide! 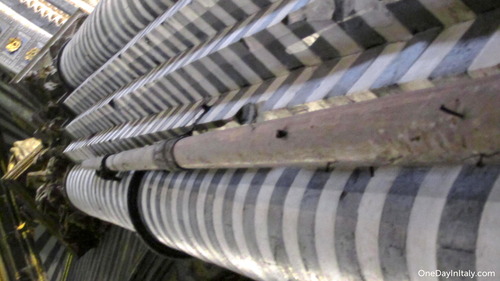 These two wooden posts are, according to legend, taken from war machines during the final battle that won the war against Florence around the 12/1300′s. The day before the battle the town had put itself in the hands of the blessed virgin, so brought these here after they won as a tribute. 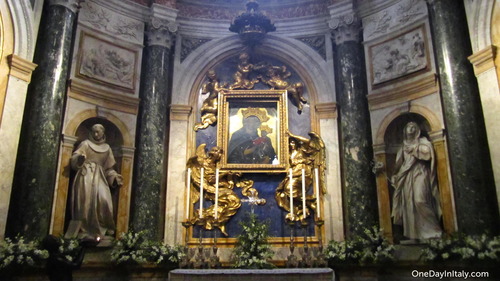 Nearby, this chapel is dedicated to this iconic image of the Virgin Mary.  And outside the chapel, is this wall: 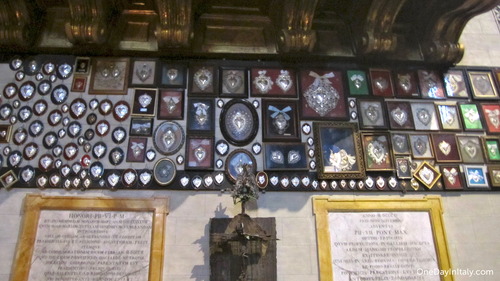 Dozens and dozens of silver and gold heart pendants of all difference sizes, some in frames and some not, crammed onto every inch of wall space!  I had seen this sort of thing just a few days ago in Bologna but had no clue what they were. I looked around and found a friendly ticket-taker to ask.  He told me that people pray to the Virgin to help them and when their prayer is answered they dedicate one of these little hearts to her in thanks. (He also said they have a whole room upstairs full of them – ha!) 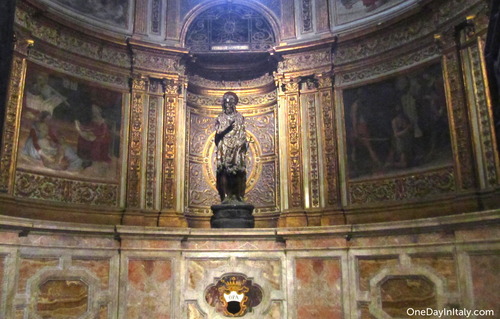 Chapel of St John the Baptist. Has his ARM there, supposedly. 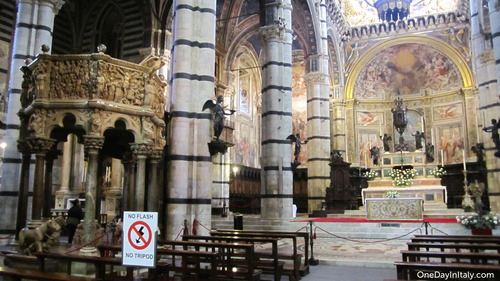 The elaborately carved pulpit sits among the pews, to the left of the main altar. 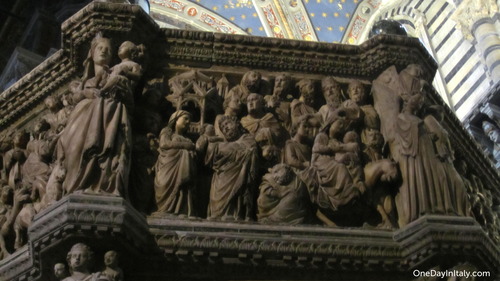 Mary with baby Jesus, saints and parishioners were carved in 3D in the wood. 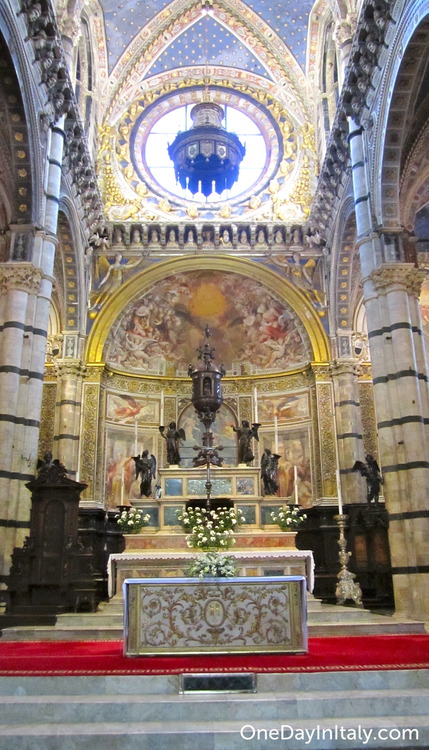 Walking away from the main altar, I idled by a section that seemed to be “under construction”.  It was the second week of December so I assumed that this was were the presepe, or nativity scene, would be assembled.

I walked up to the disinterested woman at the nearby guide desk and asked her when the presepe would be finished.  I would be in town for a few days and was hoping to see it.

The young people of the congregation were supposed to be doing it, she told me, so “chissà? il 23 decembre?” Who knows? December 23rd? 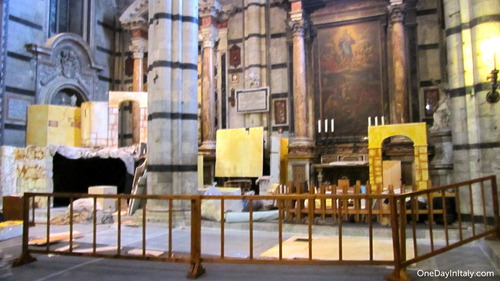 There was a deep red rope & stanchion on the left side of the nave that would direct the (currently nonexistent) line through a single door, guarded by two attendants in dark blue suit jackets.  When I approached they asked for my ticket, which I presented.  When they handed it back to me, I saw they had marked the spot for “Libreria Piccolomini”. 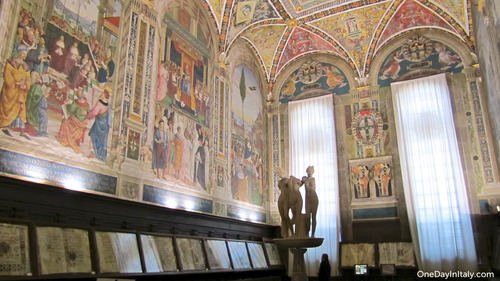 Pope Pius III (a Piccolomini by birth, a family local to the region) commissioned this library to honor his uncle, Pope Pius II, and to store the manuscripts his uncle had collected during his lifetime.

Unfortunately, the manuscripts never made it into the “library”.

But what did make it is incredible! 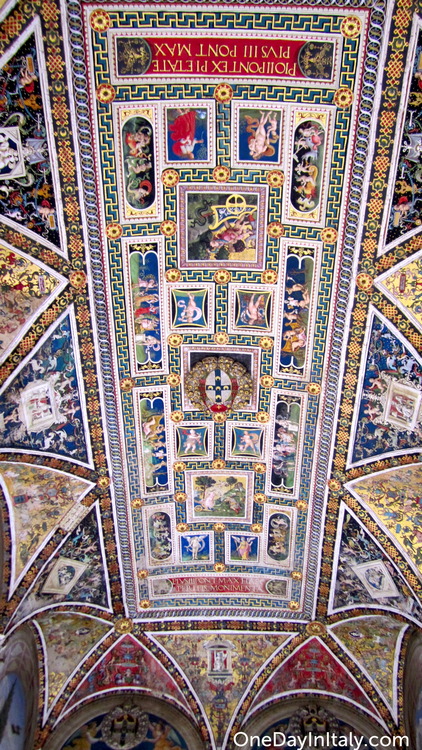 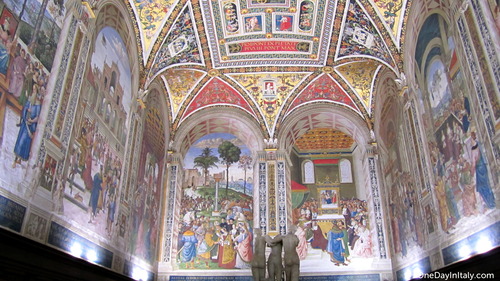 And they finally added some illuminated manuscripts! Just for display in these glass cases, but it still evokes the original intention of the room. 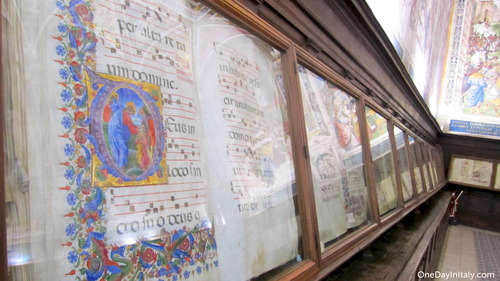 The duomo was such a delight and so beautiful that I came back that evening.  The piazza was virtually empty, the duomo lit from the bottom by strategically positioned lights and beautiful! 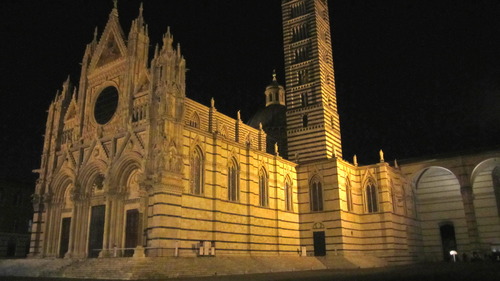 Find out more about the Opa Si Pass and Siena’s duomo complex HERE.