This article originally appeared in L’Italo Americano, an Italian-American newspaper based out of the West Coast of the United States.

In April I decided to book tickets for my parents and I to be in Italy at Christmas.  We were so excited, obviously, and are looking forward to it immensely, but after we bought the flights there was a moment where we looked at each other and said “Now what?”

What exactly does one do in Italy around Christmas?  The only thing we could think of was Midnight Mass at the Vatican.  We knew Santa Claus, though present as “Babbo Natale”, isn’t as big of a deal as he is in the States and, though you’ll see a Christmas tree now and then, they’re not the staple of the holiday like they are here.  So we were aware that Christmas in Italy wouldn’t be eggnog and reindeer and Charlie Brown’s Christmas on TV while everyone munches on candy canes, but what would it be? 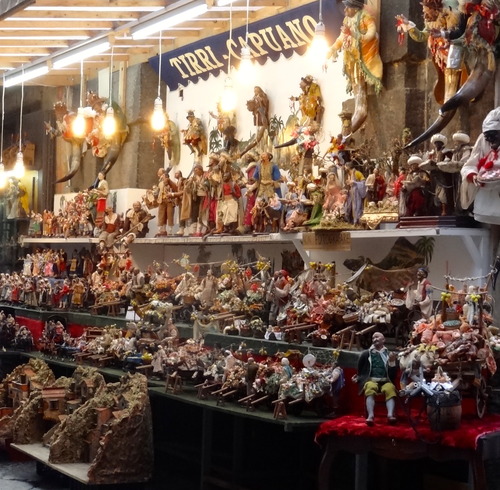 And so the search began for things to do in Italy around Christmas.   It turns out that the staple of an Italian Christmas is – probably much more appropriately than a tree – a presepe, or nativity.  Starting on December 8th (the Feast of the Immaculate Conception) you’ll find them all over, some of the largest and most grand manger scenes you’ve ever encountered.  In Rome’s Piazza del Popolo, over 100 presepi fill the square.  In Naples, via San Gregorio Armeno in Spaccanapoli is the home of dozens of artisans creating magnificent figures for your home nativity in all shapes and sizes.  Just like some people in the US have Christmas villages in their home with figurines representing various buildings and people, some Italians have nativities with figures representing their own family and people in their town in addition to the historic figures we all expect to find.  You can even find figurines of Bart Simpson as a shepherd or other cartoon characters paying their respects to the newborn Savior.  You’ll also find presepe vivente, or living nativities, all around Italy, like the one set up in a in a cave each year near Trapani, in Sicily.

And though not every family may set up a Christmas tree, the small town of Gubbio in Umbria sets one up that is large enough for the entire valley to enjoy.  Gubbio lies at the base of Monte Ingino just east of the Tuscany / Umbria border.  Every year they send people up the mountain with lights – it must be thousands and thousand of lights! – and they lay them out from the base of the mountain to the top in the shape of one very large Christmas tree!  Che magnifico! 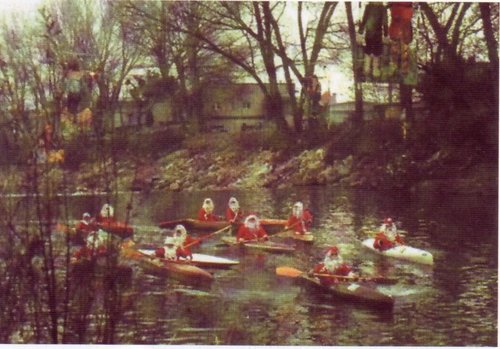 Somewhat close by in Città di Castello, the story of Father Christmas (senza reindeer) comes to life on Christmas Eve (la vigilia di Natale) as a group of men, all dressed as the ancient gift-giver, each paddle their own canoe down the Tiber River.  The canoes are lit up with Christmas lights so their journey toward Porta San Florido is easy to follow.  Near the bridge, a crib (or culla) is suspended over the water and children wait on the banks for the Father Christmases to disembark and present them with small presents. 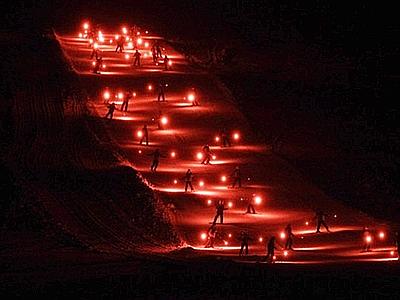 Up north in the Italian Alps, townspeople use skis instead of canoes to celebrate.  If you’re in the mountains on Christmas Eve, be sure to be outside at midnight when the Alpine guides from Cortina D’Ampezzo announce the birth of Jesus with the Fiaccolate degli Sciatori (“torchlight procession of skiers”).  Carrying illuminated torches, the guides criss-cross down the mountain lighting it up – as we would say here – “like a Christmas tree”, creating a magical spectacle for all to see. 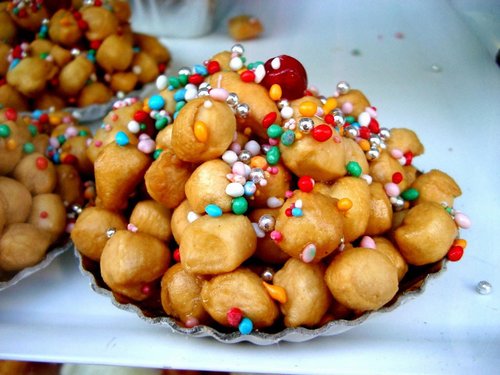 And of course, you can’t go to Italy at Christmas without EATING.  Some of the food I’m looking most forward to (and that my Italian friends have told me most about with longing in their eyes!) are the diverse and delicious Italian sweets, like marrone glacé (glazed chestnuts), struffoli (balls of fried dough the size of marbles, covered in a coat of honey and sprinkles), cenci (ribbons of fried pastry covered in powdered sugar that are also popular around Carnevale) and the many Italian sweet breads: panforte from Siena, pandolce from Genoa and panettone from Milan.  YUM!

One of the things I love most about traveling through Italy is the diversity of regional traditions, originating in a time before trains, before television, when culture truly was local down to the city and town level.  That’s how Italy can remain perpetually interesting, with unending surprises in each new hamlet.  Christmas traditions are no different.  There are so many things to do in Italy around Christmastime, it became hard to decide where to go!  I suppose that’s a good problem to have, but its frustrating not to have enough time to experience all of these wonderful events.  Perhaps my family will have to create a new tradition of our own… “Christmas in Italy”.  I like it!