Spello seemed rather deserted when I was there, particularly of tourists.  It was mid-afternoon and a few locals were chatting outside their shops, but otherwise the streets were fairly empty.  I had walked from Assisi to Spello, about 12 kilometers (though I actually got a ride the last kilometer from the winery I stopped at), and just wanted a place to sit down. Looking in my Tour-Book-By-Jessica (yes, I make myself tour books – moving on) I found notes on several restaurants but wasn’t particularly hungry, then scrolled down and saw an address for Bar Giardino Bonci with a note about a back patio.   Figuring it was as good as anywhere, I made my way toward Via Garibaldi 10.

When you approach the address it doesn’t seem likely to have an incredible back patio.  There are two sets of double doors that lead into one large room with a bar area and several small tables.  Place your order with the woman behind the bar (“Un cappuccino, per favore, in giardino”) and head to the left behind the bar through narrow doors that lead out on to the infamous garden. 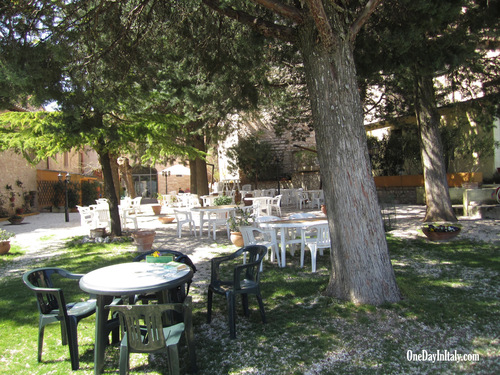 I was stunned by how large the garden was; I swear the entire village could fit in it if they wanted to (which isn’t saying much; Spello is tiny).  Just as shocking as the size was the presence of large trees shading most of the garden, invisible from the street, and dozens of plastic tables and chairs in green and white.  Someone must’ve found a K-Mart clearance sale and just stocked up.  Large terracotta potts were placed seemingly randomly throughout the garden and a mixture of grass and gravel gave unsure footing to the chairs and tables.

But not even precariously wobbling on plastic seats could’ve distracted me from the view. 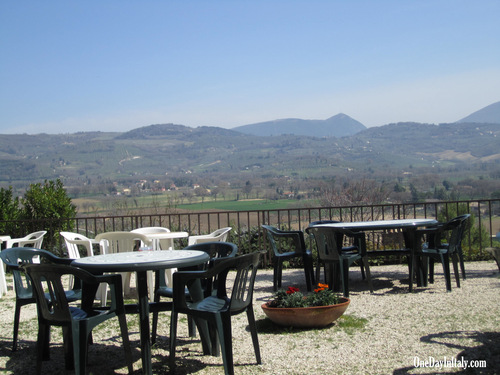 You could sit there staring for hours.  No traffic noise, no city bustle; just peaceful tranquility.  It’s as if someone has put up a screen to make it seem like there are picturesque hills on the other side of the railing, the way they do at Disney.  It’s that perfect.

The waitress startled me when she brought out my cappuccino and I wondered how long I had been sitting there staring, frozen.  Views like that seem to draw you in; they’re too vast to comprehend with just a casual glance.  I eventually took out my book, put my feet up and pulled my eyes away from the hills long enough to read a bit before stopping again and watching the countryside.

Spello is small and though connected by regional trains, they’re not necessarily reliable (I waited three hours before the “hourly” train came to get back to Assisi), so I’m hesitant to say that Bar Giardino Bonci is in itself worth a trip there, but it comes close.  Really close.